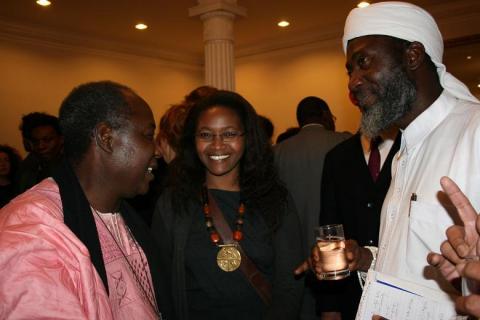 A 39-minute documentary about the peace-making efforts of an Imam and a Christian pastor who once vowed to murder each other will receive its public UK premiere tomorrow night.

An African Answer shows Imam Muhammad Ashafa and Pastor James Wuye visiting Kenya in the wake of post-election violence in 2007.

In the early 1990’s Ashafa, a Muslim and Wuye, a Christian, led rival militia groups in their native Nigeria. Several of Ashafa’s relations died in the violence, Wuye’s hand was severed. They vowed to avenge dead relatives by murdering each other. Then their own religious leaders had urged them to surrender their hatred.

Now they run the Christian Muslim Interfaith Mediation Centre in Kaduna, in northern Nigeria, founded following their reconciliation in 1995. Their story is told in the documentary The Imam and The Pastor.

The sequel, An African Answer, shows Wuye and Ashafa mediating in Kenya between the warring Kikuyu and Kalenjin peoples, in Burnt Forest, Eldoret in the Kenya Rift Valley, one of the areas most affected by the 2007 post-violence.

Around 1,000 people were killed in Kenya and tens of thousands displaced from their homes and farms. The film shows a process of trust being built between the two ethnic groups. One outcome, reported in the film, is the decision of the Kikuyu and Kalenjin to combine their market stalls in Burnt Forest instead of running them separately.

In the film, Kofi Annan, former UN Secretary General, urges the need for reconciliation at the grass roots level in villages across Kenya, as much as at the political level.

He says: “We need to learn, indeed, from Imam Ashafa and Pastor James and multiply in a thousand places their experiences of healing and reconciliation.”

Trained in mediation skills, Wuye and Ashafa were invited to make two visits to Kenya in May and September 2008. A film crew travelled with them to make the fly-on-the-wall documentary film. ‘We at FLTfilms decided to follow them,’ explained the film’s director, Dr Alan Channer. “We had no idea how they would get on or how their mediation would work. But as we made the film, something of their work slid off into our own lives between us on the film crew.”

Vernon Ellis, Chair of the British Council, says: “This film underlines the importance of dialogue in reconciliation; in particular the importance of listening and seeking to understand. It is inspiring to see this process at work led by leaders from different faiths working together.”

The film is now being shown across Kenya and Imam Ashafa and Pastor James are being invited to other African countries, including Sudan where they recently met with the Vice-President of South Sudan in Juba.

“Never underestimate your power to create a change in the world,” urged Imam Ashafa at a screening on Tuesday night at the Royal Society of Arts, Manufacturing and Commerce. “I came out of a slum in Nigeria. I needed to break the chain of hate. I needed to pray for purity of heart, meaning sanity and decency. I didn’t have any O’levels in Western education; now I have two honorary degrees. Just start with yourselves to change the world.’” Last year, the imam and the pastor were awarded the inaugural Jacque Chirac Prize for conflict prevention in Paris.

Earlier during their UK visit, the two Nigerians met with prison chaplains and a group of young offenders at Rochester Prison last Monday. They were interviewed by The World Today on the BBC’s World Service and by the BBC’s Swahili and Hausa language services. They visited the Institute of Development Studies at Sussex University yesterday, at the invitation of Sir Richard Jolly, and were received by the All-Party Kenya Group in parliament last night.

They have been invited to the UK by Initiatives for Change a global network whose aim is to build “relationships of trust across the world’s divides”.

A public launch of the film will take place at Friends Meeting House, Euston, in London tomorrow night (6.30pm for 7pm) to be chaired by the BBC’s world affairs correspondent Mike Wooldridge.

An African Answer is publicly released on DVD from FLTfilms: www.fltfilms.org.uk and, thanks to support from Kenya’s Ministry of the Interior is going on show there.

First pubished on the website of The Times in its Faith column on 11 November 2010.