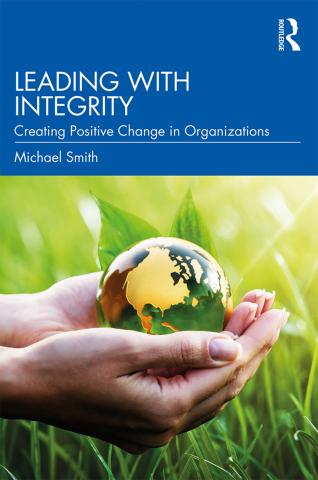 Thanks to global news and social media, we are the most informed and socially conscious generation in history. But what are the sources of inner inspiration that guide our daily conduct and motivations in the workplace?

Far from the old Machiavellian dictum that "the ends justify the means", the reverse is often the case: the means determine the ends. This book presents the stories of business leaders who have aimed to build trust in the economy, and have delivered value through integrity, cooperation, stewardship, purpose and sustainability. It proposes eight Cs of trust which can define the culture of organizations: contracts, competencies, covenants, character, conscience, conviction, courage and change.

The book makes the clear link between personal decision-making and global outcomes and demonstrates how positive decision-making can lead to change inside organizations and beyond.

"This excellent and practical book builds on Mike Smith's personal engagement with and study of leadership. In it, he distils the product of many meetings with leading individuals and workshops and conferences he has led addressing the subject."
— Sir Mark Moody-Stuart, Chairman, UN Global Compact Foundation and former Chairman of Shell Group 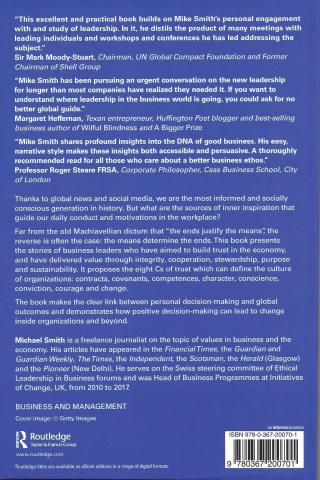 "Mike Smith has been pursuing an urgent conversation on the new leadership for longer than most companies have realized they needed it. If you want to understand where leadership is the business world is going, you could ask for no better global guide."
— Margaret Heffernan, Texan entrepreneur, Huffington Post blogger and best-selling business author of Wilful Blindness and A Bigger Prize

"Mike Smith shares profound insights into the DNA of good business. His easy, narrative style makes these insights both accessible and persuasive. A thoroughly recommended read for all those who who care about a better business world."
— Professor Roger Steare FRSA, Corporate Philosopher, author of Ethicability

"Taking 'time out' to contemplate what is right action going forward is a transformative leadership habit. Mike Smith shows us, through many powerful stories, how leaders tapped into their own values compasses to create ethical and sustainable businesses."
— Anita Hoffmann, founding CEO of Executiva.

Listen to two Initiatives of Change UK's podcasts on Leading with Integrity: 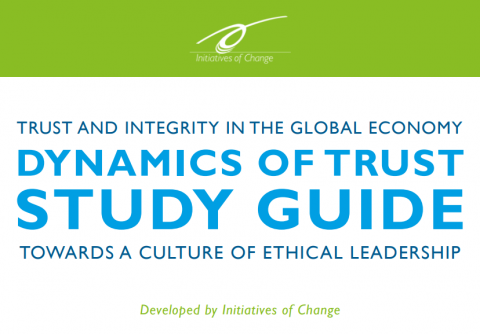 This Study Guide is for use in business leadership development and in business schools. It is based on the values expressed at the annual summer conferences on Trust and Integrity in the Global Economy (TIGE), which were held in the Swiss Alpine village of Caux for over a decade, and in the national programmes of TIGE. It also draws on the track record of Asian business values conferences held at Asia Plateau, the Initiatives of Change centre in Panchgani, India.
Download study guide

Great Company: trust, integrity and leadership in the global economy 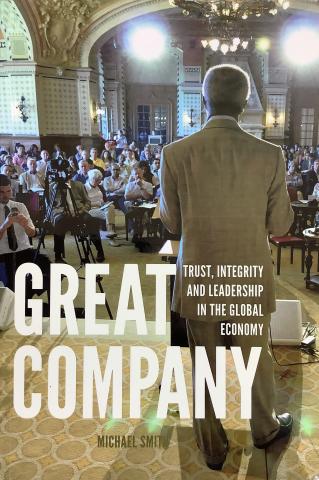 What human motivations inspire today's generation of entrepreneurs and business leaders who are shaping the world of tomorrow? Many believe they are providing not just commercial value but also social value in meeting the needs for goods, services, jobs, fulfilment and economic wellbeing. An extraordinary shift is taking place towards the values of integrity which build trust in the global economy. In Great Company, Michael Smith tells a wide range of compelling stories from around the world. He draws especially on those told by business leaders and others at the Initiatives of Change centres in Caux, Switzerland, and Panchgani, India, since the crash of 2008. Their stories are having a global impact.

"Every time I work with Mike Smith and Initiatives of Change I come away strengthened in my belief that business can and must be a force for good. People forget that inside every CEO there is a human being trying to climb out. As this book testifies, Mike has a rare skill in providing CEOs with ladders and platforms!" —Mark Goyder, Founder Director, Tomorrow's Company and author of "Living Tomorrow's Company:rediscovering the human purpose of business"

"The role of the corporation, and the harmony of its existence with community and society, has come into sharp focus in management thought and practice. Michael Smith has tackled a key subject of the future—very credibly and creditably." —R Gopalakrishnan, Director, Tata Sons Limited, India

"A resilient, sustainable and successful business is built on trust and integrity, amongst all stakeholders on the inside and between them and those on the outside. This is hard work and often comes face to face with adversity and tough decisions. In the end, however, society will respect and uphold those with the interest of the common good in mind. Great Company succeeds in bringing this message home through the interplay of the Initiatives of Change dialogues in Caux with the stories of women and men who chose for trust and integrity over compromise, irrespective of the cost. The value of values is indeed both precious and priceless." —Arnold Smit, Director of the Centre for Business in Society at Stellenbosch Business School, South Africa

Trust and Integrity in the Global Economy: stories of people making a difference 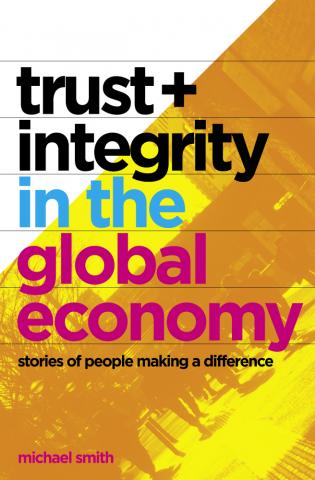 The financial crisis that engulfed the world in 2008 provided a stark focus on fundamental, moral, ethical and even spiritual issues. Words used by commentators have run the gamut of human emotions: gambling and greed, dishonesty and fear, panic replacing confidence, risk and hubris versus prudence, and faith in the banking system or lack of it. Never have the virtues of trust and integrity been more needed in the global economy. The stories told in this book serve as illustrations of how trust and integrity can be applied in action. British journalist Michael Smith takes us into the lives of entrepreneurs, farmers, social activists and campaigners who are changing the conditions of the communities and countries where they work. What motivations and leadership skills do they show? And what are their core ethical values? In telling their stories, the author gives the hope that the global economic system can be tempered by conscience-based decision-making.

"In ancient times - before the rise of the organization cubicle - the heroism of individuals was taken for granted as a standard of persona excellence.... But today a spiritual drudgery inculcated by a need to toe the line and fit into team cultures claims first place in our our work lives--to get along by going along. Michael Smith has written an important book challenging the need to succumb to this modern mental slavery, describing some who are leaders, not followers. His conclusions as to what it takes to make a difference are reassuring because the skills he finds necessary are readily at hand for all of us." —Stephen B Young, Global Executive Director, Caux Round Table group of business executives

The Fullness of Life: reflections on the Lord's Prayer for today's world 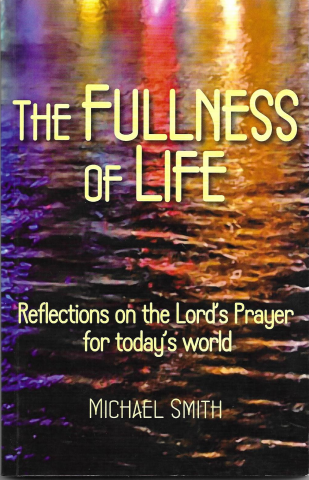 "Many books have been published about the Lord's Prayer, but few which are as fresh as this collection of Michael Smith's meditations on the text of Christ' exemplary prayer, that prayer of the Kingdom which he gave to his disciples in response to their request that Jesus should teach them to pray. Throughout, Michael shares something of his own spiritual journey and experiences through this interaction between the way we pray and the way we live." —The Rt Revd Michael Marshal, President, The Awareness Foundation

"Michael Smith's small book on the Lord's Prayer has a... defined starting point. A chapter is devoted to each phrase of the Lord's Prayer, providing some relevant background and information, and ending with some brief but profound questions. For example, the chapter on "Thy Kingdom come" starts with the expectations of the Kingdom in Jesus's time, and makes reference to more recent experiences, before asking questions such as 'Where is God's Kingdom?' and 'What can I do to make it a reality in my own life? In the lives of others? In the world as a whole?' Examples from Smith's own experience enrich many chapters. As intended, then, this book could make a good staring-place for exploration in a small group, and no prior knowledge of the Lord's Prayer is needed." —Dr Anne Spalding, The Church Times, 5 July 2013

"This is a down-to-earth yet insightful reflection on the prayer of prayers whose potential has, paradoxically, been blunted by its very familiarity. Rich in quotes, plain in exposition and shrewed in pitch, Michael Smith's refreshing book deserves a wide audience, who will thank him for it."
—Andrew Phillips (Lord Phillips of Sudbury)

"The Lord's Prayer is the most radical and subversive text ever written. In this well crafted book Mike Smith reconnects a modern audience with its deep truths and challenges. Read it, understand it, and then pray the Prayer if you're brave enough to do so."
—James Featherby, Chair of the Church of England Ethical Investment Advisory Group; author of Of Markets and Men and The White Swan Formula

The Sound of Silence

"In an age of information real inspiration comes in times of silence reflection".

To order any of these publications, please click here.