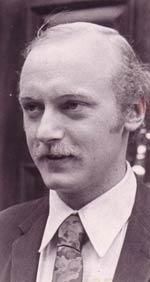 ALEC SMITH, the renegade son of the Rhodesian Prime Minister Ian Smith, had an idyllic childhood growing up on the family’s farmstead in Selukwe (now Shurugwi). But his idyll was shattered by his father’s assumption of power in April 1964, when Alec was 12 years old.

At the Prime Minister’s Salisbury residence, “we were rarely just family and that was the trouble”, commented Alec. As he became increasingly alienated from his father, his lifestyle descended into a haze of alcohol and drug abuse — he could count at least 50 LSD trips. He was expelled from university in South Africa after his first year, before being arrested on the Mozambique border for drug running. He was fined and given a suspended sentence.

Yet he was to have a profound influence on his father as the country approached black majority rule in 1980, thanks to an extraordinary conversion experience in 1972. He was driving through the capital Salisbury when, by his own account, he heard a voice from the back seat saying: “Go home and read the New Testament.” It was so real to him that he stopped the car to see who was there.

The experience liberated him from drugs and alcohol. But he also wrote, in his autobiography Now I Call Him Brother (with Rebecca de Saintonge, 1984) that “the scales fell from my eyes” about the appalling discrimination of his father’s white regime against the majority black population. He became an outspoken critic of white rule, despite being personally reconciled with his father. His laid-back, laconic style reflected a strong and faith-filled independence of spirit.

Shocking many of his contemporaries, he became a close friend of black nationalist leaders, including the Rev Arthur Kanodereka, the treasurer of Bishop Abel Muzorewa’s United African National Congress. Smith had made a public apology for white attitudes, and his own selfish lifestyle, at a conference in Salisbury and this had made a deep impact on Kanodereka.

Kanodereka invited Smith to speak at his church in what was then the black township of Harare. It was an unprecedented and courageous move to invite the son of the black population’s most hated Prime Minister, especially as the venue was known as a focus for guerrilla activists. On arrival Smith made a quick mental note of the nearest exit in case things got out of control. But he was well received. Tragically, Kanodereka was later assassinated, some suspecting his own people, though the culprits were never found.

Smith went on to play a key role in affecting an eleventh-hour rapprochement between his father and Robert Mugabe, on the eve of Mugabe’s election victory in March 1980.

At the time all sides feared that, whatever the outcome of the elections, the violence of the country’s civil war would escalate.

Smith had been searching for a way of relating his Christian faith to the situation in his country. He found it in an informal group of senior black and white Rhodesians, dubbed the Cabinet of Conscience, which aimed to build bridges in an effort to end the civil war.

One of the black members of the Cabinet of Conscience, Joram Kucherera, had access to Mugabe and, as it became clear that Mugabe would win the elections, Kucherera declared that Ian Smith should meet Mugabe privately. The two men talked for several hours.

The tone of reconciliation expressed by Mugabe and Ian Smith the next day, as Mugabe was declared Zimbabwe’s first black Prime Minister, astonished the world. For his part, Ian Smith said that he found Mugabe “a reasonable man”, and recommended that whites should stay in the country, as he intended to himself.

It is arguable that Smith’s influence on his father helped to avert a bloodbath. “I have no doubt that Alec’s work saved thousands of lives,” says an Australian journalist, John Bond, who had known Alec in Zimbabwe. In his evaluation, Ron Kraybill writes in the book Religion, the Missing Dimension of Statecraft (1994) that “the Mugabe-Smith meeting without a doubt altered the history of the nation.”

Tragically, the miracle was not to last, with black-white relations souring over the issue of land ownership, pitching the economy into chaos, and Mugabe refusing to recognise legitimate elections. Smith believed, in hindsight, that the Cabinet of Conscience, which petered out after Mugabe’s victory, should have continued.

After the elections Smith joined the Corps of Chaplains in the Zimbabwean Army, though he was never ordained. The task was to help to integrate blacks and whites, who had been at war against each other, into a single force.

In recent years he tended his father’s farmstead in Shurugwi, western Zimbabwe. He is survived by his wife, Elisabeth, two daughters and a son. Ian Smith, now 86 and living in South Africa, said on the news of his son’s death: “He was my rock.”