Book review: The future is unpredictable but we can all shape it 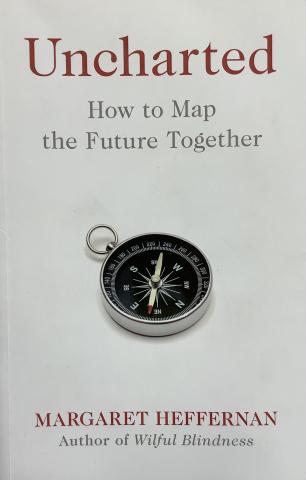 'Uncharted: how to map the future together' by Margaret Heffernan, Simon & Schuster, 2020.

When Rebecca Hoskins arranged for the 1,500 people in her village in Devon to each receive a cloth bag, in order to cut out the use of plastic ones, she had no idea that the world’s media, from CNN to Russia, would descend on them to report the story.  A province of 32 million people in China banned the use of plastic bags overnight. African countries followed suit.

Margaret Heffernan comments that ‘small actions can make a disproportionate impact. You just won’t know, don’t know, till you try.’

The thrust of Heffernan’s compelling book as that the future is totally unpredictable. But we can shape it. She poses two questions: ‘What do we need to do? And what do we need to be?’ The latter is as important as the former.

The future, according to academic research, cannot be predicted with any accuracy more than 400 days ahead. And history does not repeat itself, despite a belief to the contrary. The Good Friday agreement in Northern Ireland, for instance, ‘was the result of human beings making decisions very different from what had gone before.’ Outcomes, Heffernan says, aren’t inevitable. ‘What happens next is a choice.’ Human motivation—what we need to be—is central. But, she warns, “Absolute accurate forecasting is feasible, but only where everything is known and predetermined—and nowhere is that true.’

Yes, there is a need for scenario planning. What will our world be like in 10, 20 or 100 years? Svalbard in Norway is home to the world’s largest (underground) seed bank. It is the vision of American agriculturalist Cary Fowler who saw the need to protect the world’s agricultural diversity in order to save civilisation. Every seed crop known to humankind, dating back 13,000 years, is stored there.

Svalbard is what Stephen Hawking called a cathedral project: those that will take generations to complete, just like Gaudi’s Sagrada Familia cathedral in Barcelona, due to be completed in 2026, a hundred years after Gaudi’s death.

Other cathedral projects, which may have no end date, include mapping the human genome and CERN in Switzerland—the European Organization for Nuclear Research. It includes the Large Hadron Collider in search of the particle known as the Higgs boson. There is no business case for the sums involved—$9 billion and involving 10,000 people—for such pure research, though the unanticipated spinoffs have been invaluable, including essential components in MRI and PET scanners.

Heffernan tells story after story of the impact of human decisions and in so doing takes us on a journey around the world—from Mexico to Slovenia and including Wales’ pioneering Wellbeing of Future Generations Act, passed in the Welsh Assembly in 2015.

Heffernan wrote her book before the Covid-19 pandemic, which has strengthened her thesis that the future is, to say the least, unpredictable. But she does address responses to previous pandemics including AIDS and Ebola. The Coalition for Epidemic Preparedness Innovation (CEPI) asserts that while prediction may not be the answer, preparedness could be. One is left wondering what was missing in preparedness for Covid-19.

Heffernan asserts that ‘Extravagant claims for artificial intelligence don’t just denigrate real intelligence but mask a determination to force the world into predictable patterns.’ But she is perhaps too dismissive of the impact of technology ‘to craft a fitting legacy for successive generations’, especially when it comes to tackling climate change.

Nonetheless, she concludes on an optimistic note: ‘Imagination, creativity, compassion, generosity, variety, meaning, faith and courage: what makes the world unpredictable are also the strengths that make each of us unique and human.’ And we can all exercise daily 'the self-determination that builds cathedrals'.