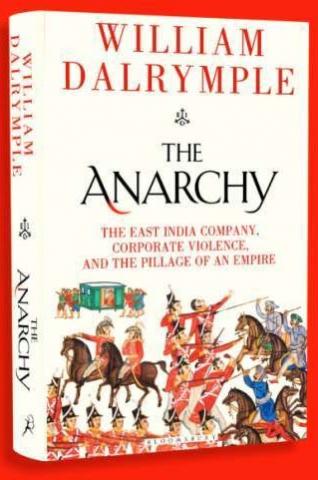 The Anarchy: the East India Company, corporate violence, and the pillage of an empire

William Dalrymple, the New Delhi-based Scottish historian, loves India. But he deplores the rise of Hindu nationalism under the Narendra Modi government. In an Intelligence Squared podcast, 26 August 2020, he said he was “extremely anxious” about it. His social media accounts had suffered troll attacks by far right Hindu nationalists, accusing him of being a communist, a Naxalite (violent Maoist movement in eastern India) and an imperialist. He hopes that India’s secular constitution, which gives equal rights to all faiths, will never be changed.

He also thinks the statue of Robert Clive, head of the East India Company which took over India in the 18th century, which stands outside the Foreign and Commonwealth Office in Whitehall, should be removed and put in a museum. “He was a monster—horrible. He shouldn’t be there,” Dalrymple commented.

Most striking about the story of the East India Company, in Dalrymple’s meticulously researched book, is the sheer scale of the carnage that led to the EIC’s takeover of the subcontinent. The decisive battle of Buxar in Bihar (1764), for instance, resulted in the death of some 5,000 troops loyal to the Mughal Emperor. In victory, the EIC lost 850 highly trained, disciplined and well paid sepoys (Indian infantrymen). It was “one of the most decisive battles of Indian history,” Dalrymple writes. Such losses were typical during what became known as the Great Anarchy. The EIC army fought battles against the Bengalis, the Rohillas of Afghanistan, the Marathas, the Moghuls and the French.

The EIC started out as a joint-stock company trading in commodities that included tea, spices and cloth. (The Boston Tea Party, which triggered the American war of independence, was the dumping of EIC-owned Chinese tea into Boston harbour.) The EIC had initial support in the British Parliament as so many MPs held shares in it. Their motives were self-interested. It also brought in huge tax revenues.

The EIC had only 35 full-time staff in its small head office in the City of London. Yet they “executed a corporate coup unparalleled in history: the military conquest, subjugation and plunder of vast tracts of southern Asia. It almost certainly remains the supreme act of corporate violence in world history.” The company trained up a private security force of around 200,000 people—twice the size of the British Army and bigger than the armies of most other countries. For a trading company to employ sepoys was unprecedented.

The EIC’s growth was driven by the prospect of vast profits, repatriated back to Britain, as well as rivalry with the Dutch East India Company and a determination to prevent the French from taking over in India—at that time the world’s economic powerhouse.

Robert Clive, the first British Governor of Bengal, had won the earlier Battle of Plassey, 150 km north of Calcutta, against the Nawab (Governor) of Bengal in 1757. This established the supremacy of Clive and the EIC. Clive of India amassed a vast fortune. Yet he hated the country, suffered from depression and, returning to London, committed suicide by cutting his own throat in his home in Berkeley Square, Mayfair.

The most heinous of the EIC crimes was its profiteering from the Bengal famine of 1770, following drought and two years of crop failure. Punitive taxes imposed by the EIC crippled the revenues of the rural population, leading to starvation and suicides. The famine killed about 10 million people. Even EIC supporters back in England were appalled and the tide of public opinion turned against the Company.

By the time of the Bengal famine, Warren Hastings had succeeded Lord Clive, becoming the first de facto Governor-General of India. He was impeached for corruption by the Westminster Parliament in 1787—despite his love and respect for India—and Edmund Burke, the Irish statesman, railed against him. Hastings was acquitted seven years later.

Richard Wellesley became the Governor-General of Bengal from 1798-1805. He led EIC forces to oust the principled and long-suffering Moghul emperor Shah Alam from his ancient and decaying Moghul capital, Delhi. (Wellesley’s younger brother, the Duke of Wellington, defeated Napoleon at the Battle of Waterloo.) “This would be the moment when the Company finally, both symbolically and in substance, came to replace the Mughals and the Marathas as the paramount rulers of India,” writes Dalrymple. “In less than fifty years, a multinational corporation had seized control of all of what had once been Moghul India.”

The British parliament finally took action, passing the East India Company Charter Bill in 1833. This stripped the company of its right to trade. It was now only a governing corporation. Parliament removed the company from power altogether following the Indian uprising of 1857, when the company’s own sepoys rose up in rebellion. The company put them down ruthlessly, “hanging and murdering many tens of thousands of suspected rebels in the bazaar towns that lined the Ganges, probably the bloodiest episode in the entire history of British colonialism.”

In response, “The Victorian state… successfully tamed history’s most voracious corporation.” Its assets were nationalized and passed to the control of the British Crown of Queen Victoria. Thus began the British Raj in India which ended with Independence 90 years later in August 1947.

Dalrymple extrapolates the experience of the EIC for today’s multinational corporations. He concludes: “No contemporary corporation could get away with duplicating the violence and sheer military might of the East India Company, but many have attempted to match its success at bending state power to their own ends.” Corporate lobbying in Washington DC remains a whole industry in itself. “In the twenty-first century,” he concludes, “a powerful corporation can still overwhelm or subvert a state every bit as effectively as the East India Company did in Bengal in the eighteenth.”

Dalrymple deplores the fact that British school children are taught so little of this downside of their history. This is a deeply honest book about a shameful period and should be on the curriculum.