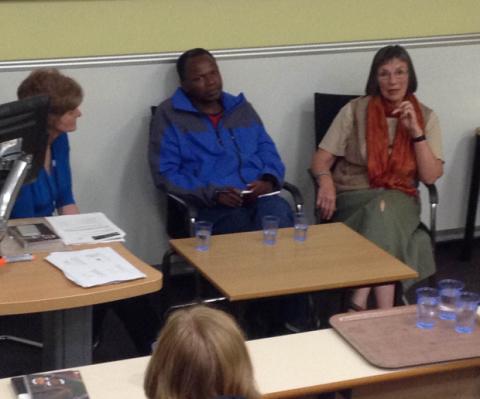 The award-winning documentary film Beyond Forgiving, shot in post-Apartheid South Africa, is 'hugely humbling and stirring', said Julia Deakin, poet and lecturer in English Literature at the University of Bradford in Yorkshire. She hosted an evening in Bradford, on 22 May, with the film's two protagonists, Letlapa Mphahlele and Ginn Fourie from Cape Town, attended by students at the university's Department of Peace Studies. 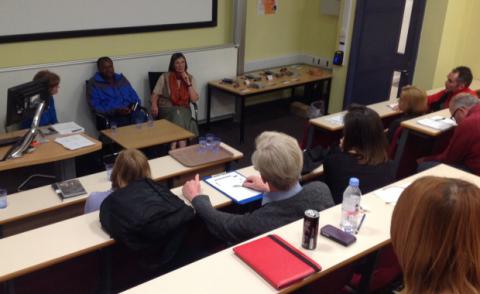 This year marked the 40th anniversary of the founding of the peace studies department, the world's largest of its kind, and Deakin said: 'I can't think of a better building block for marking the 40th anniversary' than the film the students had just seen. The film, she said, brought 'relief at the humanistic level and not only at the legalistic and redistributive justice level'. Fourie and Letlapa had earlier been welcomed to the university by the head of the department, Professor David Francis, originally from Sierra Leone, who is an advisor to African heads of states.

The film tells the remarkable story of the reconciliation between Letlapa, politician and freedom fighter, who ordered the Heidelberg Tavern shooting in Cape Town, and Ginn Fourie, whose 22-year-old, daughter, Lyndi, was killed in the shooting. Against all the odds, they have since become friends, thanks to Fourie's spirit of forgiveness and determination to understand the history of white oppression of South Africa's black majority. 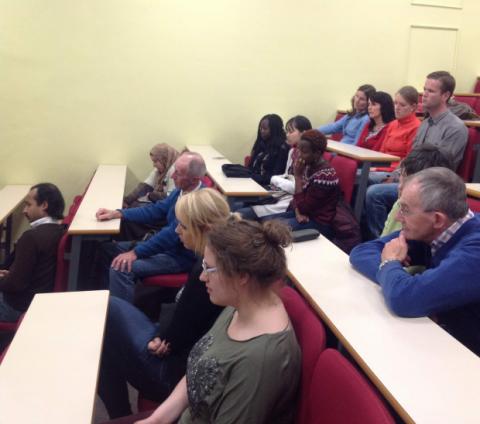 'Our direct ancestors didn't want to take responsibility but we wanted the privileges,' Fourie told the students during the discussion after the film. 'We insinuated our superiority. As I studied the effects of colonialism I felt guilty.' For his part, Letlapa said that 'governments cannot legislate for forgiveness; only individuals can forgive.' But governments had to legislate for justice and reconciliation. Nor should the offer of forgiveness 'oblige people to respond', he added, though in the film he declares that Fourie's declaration of forgiveness to him was the last thing he expected of her. He subsequently invited her to take part in his home-coming celebration in his village community.

An Englishman in the audience, who has lived and worked in Namibia, said that 'the film talks to your humanity', while a man from the Democratic Republic of Congo, where over five million people have been killed in civil war, invited Letlapa and Fourie to come to his country. 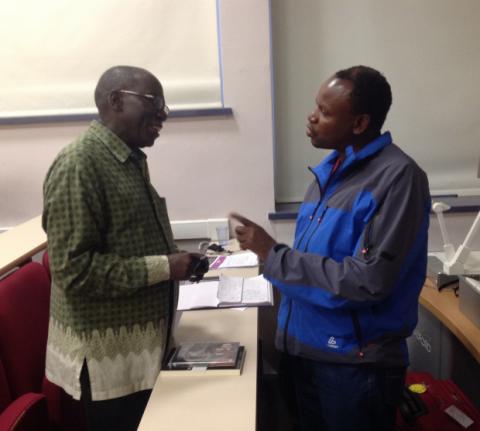 Fourie said that South Africa's public prosecutor had asked her to submit an affidavit on Letlapa's behalf as part of the post-Apartheid reconciliation process. She did so and quoted press reports of his work for reconciliation. Since then, the authorities had decided that anyone who was working for reconciliation would not be prosecuted, she said.

'Beyond Forgiving' is the fifth film of their story, which has also been the subject of three doctoral theses, Fourie said. She has family and friends 'who are very supportive' of her friendship with Letlapa, 'and family and friends who sadly don't want to have anything more to do with me'. Her son works to support the Lyndi Fourie Foundation, set up in her memory to support victims of post-traumatic stress disorder. 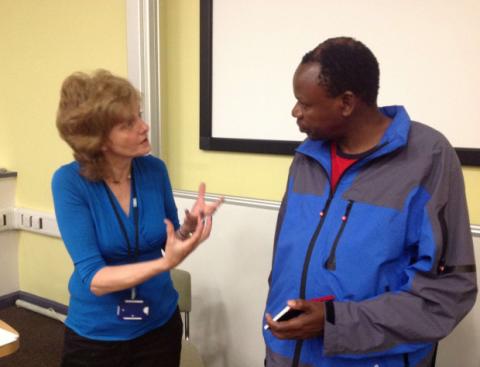 Asked by a student what were the key issues South Africa now faced, Letlapa said that 'there are no consequences for people who are corrupt. That culture of impunity is the greatest threat to democracy in South Africa.' He added that the parents of five African children killed by the South African Defence Force, which had prompted his reprisal attack, 'have never met their killers. They have no one to forgive, or not to forgive according to their choice, and they have no closure.'

Thanking the South African visitors, Lee Scholtz of Schools Linking Network Bradford read a moving poem on forgiveness written by the South African poet Antjie Krog. Julia Deakin thanked the visitors for an 'inspiring' evening that had 'moved from feel-good to gravity.'

Letlapa Mphahlele and Ginn Fourie are on a two-week tour of the UK which has included receptions at the South African High Commission in London and in Parliament. Their tour is being sponsored by Initiatives of Change UK, the Forgiveness Project and the Wilderness Foundation.