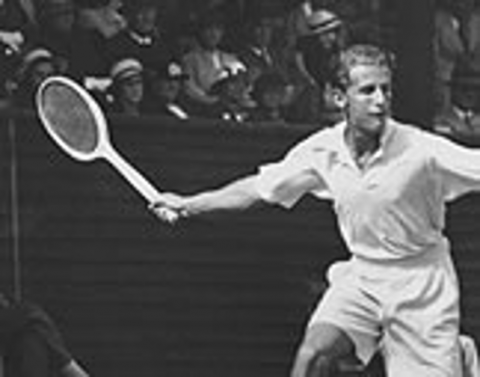 British tennis star of the 1930s

Bunny Austin was one of the great figures of world tennis. He and Fred Perry were members of the last British team to win the Davis Cup. Their four consecutive victories in the 1930s marked a golden era for British tennis which has never been matched since. Austin remains the last British player to reach the Wimbledon men’s finals, an honour he would have been glad to relinquish. [Indeed, he did so when Andy Murray won the Men's Wimbledon finals in 2013.] He and Perry were the matinée idols of British tennis fans in an age that was gentler and more sporting, though no less competitive, than today’s fiercely fought contests.

Austin also became known for his Christian calling, manifest through his commitment to the pre-war movement the Oxford Group and its later campaign of “Moral Rearmament” (MRA). It led to controversy and opposition, and for many years he was excluded from the All England Lawn Tennis Club.

In 1932 Austin was the first Englishman in 23 years to reach the Wimbledon finals. There he came up against the huge serve of the American Elsworth Vines who overpowered him in straight sets. The following year Austin turned the tables on Vines, trouncing him 6-1, 6-1, 6-4 during the Davis Cup matches in Paris. The British team went on to beat the French cup holders in the challenge round, their first victory in 21 years. King George V sent a message of congratulations and as the Golden Arrow pulled into Victoria Station, a jubilant crowd of 10,000 welcomed the victorious team and lifted Austin and Perry shoulder-high. The national team event, then confined to amateurs, was considered as prestigious as Wimbledon.

Over the following three years, with Dan Maskell traveling as the team’s practice partner, they beat off challenges from the United States and Australia. Britain has never won the Davis Cup since.

Austin reached the Wimbledon finals again in 1938 before being beaten in straight sets by the American Don Budge. When Budge turned professional at the end of the year, Austin was briefly ranked the world’s No 1 player. The Wimbledon title eluded him but in the course of his 38 Davis Cup wins he beat five Wimbledon champions. In 1977 Lance Tingay wrote in his book 100 Years of Wimbledon, “If consistency of high effort was a sole criterion then Austin would rank among the finest players of all time.”

Dark and handsome, Austin was the darling of the crowds—and every schoolgirl’s pin-up. But he was always conscious that he lacked the physique of the taller, more powerful Perry. On the courts their styles complemented each other; the power and aggression of Perry matched by the athletic grace of Austin, who was known as the “Nijinsky of the courts”.

Off the courts they held a friendship of opposites. While Perry was the son of a Labour MP and state-school educated: Austin was educated at Repton public school and became a bowler-hatted stockbroker with little work to do on a stock exchange shaken by the Wall Street crash of 1929.

After an exhibition match against each other in 1933, one sports journalist moaned that “they resembled nothing so much as a couple of old cab horses”. From then on, following their Davis Cup victories, they would address each other in their letters as “Dear old cab horse”, while Perry sometimes wrote simply, “Dear Rabbit”.

Henry Wilfred Austin—he was nicknamed “Bunny” at school after a Daily Sketch cartoon rabbit called Wilfred—spent his childhood in Norwood, south London. His father was a keen sportsman who saw in his son the chance to fulfill the ambitions that he had never achieved. Austin learnt to hold a racket at the age of five and would knock the ball against his nursery wall, a rocking horse acting as a net. Two tennis clubs were within walking distance of their home and when his elder sister, Joan, became the British junior tennis champion he was determined to follow in her footsteps.

An all-round sportsman, he became the national schoolboy tennis champion three years running. At Cambridge University, where he read history, he was tennis captain and in his first year there, at the age of 19, was selected for the Davis Cup team. But his father thought he was too young and advised him to turn down the invitation.

It was a costly mistake. The 1926 General Strike closed the university and when Austin was selected to play for Great Britain against America that June he was out of practice and unfit. The match strained his heart and he was ordered to rest for a year. Health problems were to dog him throughout his tennis career.

But he was innovative. In the sweltering heat of Forest Hills, New York, in 1932 he caused a sensation by appearing in shorts instead of the customary long flannels. He did so again the following year in Monte Carlo. Leaving his hotel in a long overcoat, he was approached by an alarmed concierge: “Excuse me, Mr Austin, I think you’ve forgotten your trousers.” The real test, however, was whether shorts would be allowed at Wimbledon. He and three other players duly appeared in them, the heavens did not fall, and the fashion was established. 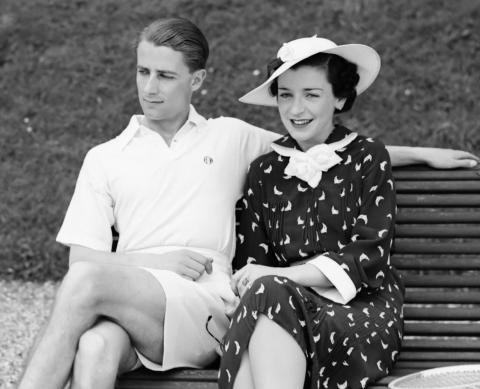 On board ship crossing the Atlantic in 1929 Austin met the actress Phyllis Konstam. She was Alfred Hitchcock’s leading lady in one of his first “talking pictures” and was on her way to Broadway to star opposite Laurence Olivier. She and Austin were married in November 1931, the newspapers hailing the marriage as the wedding of the year.

Austin had married into a glamorous world that appealed to his love of theatre. Their own story was later dramatized in a West End production, Love All. But it was a stormy marriage at first, not least because of Konstam’s vitriolic reaction to Austin’s encounter, two years after their marriage, with the Oxford Group. Austin had been reading about the teachings of Christ and was searching for a broad enough application to match the challenges of impending war. He felt that he had found it in the group. Konstam, however, was alarmed by the effect it might have on their friends, and persuaded her husband to break with it.

Austin had already begun speaking out, in press articles and on public platforms, about the threat of war. He and Perry had been the only players to raise their voice, in a letter to The Times, against the Nazis’ ban on German Jews such as Daniel Prenn from their Davis Cup team.

Impelled by the prospect of war Austin rejoined the Oxford Group and became one of its most prominent advocates. He spent the war years in America at the invitation of the group’s founder Frank Buchman. It caused a storm, with some British newspapers accusing Austin of being a pacifist and draft dodger. It was an unfair charge. He had gone to America with the permission of three British government departments, on the understanding that he should return to serve in the war if requested. He never was.

Like other religious workers, he was held to be in a reserve occupation as a “lay evangelist”, providing a vital public service. Remaining in America, he and his wife, who had come to appreciate her husband’s religious convictions, put their efforts into creating Christian theatre, aimed at improving industrial morale for the American war effort. President Roosevelt, in support, received Austin at the White House.

But the press attacks continued and, in 1943, the New York Draft Board ruled against Austin’s “occupational deferment” and he was called up into the US Army’s Air Services as a private. A routine medical examination diagnosed that he suffered from Gilbert’s Syndrome, a periodic malfunction of the liver which gave him bouts of jaundice. At last Austin understood why he had occasionally suffered severe weakness on the tennis courts. The illness disqualified him from active war service and a commission.

Austin devoted the rest of his life to Moral Rearmament and wrote several books about it, as well as his autobiography, with Phyllis Konstam, A Mixed Double (1969). They worked closely with Buchman, traveling widely with him in America and Europe as well as Australasia, the Pacific countries and India. They pioneered MRA’s Christian theatre productions, particularly on their return to London in 1961, at the Westminster Theatre. After his wife died in 1976, Austin wrote his last book in memory of her, a series of touchingly honest “letters” entitledTo Phyll With Love (1979).

Austin’s membership of the All England Club had lapsed during the war, along with many others’. But when he eventually reapplied in 1961, he was told by the then club chairman that there were “some who do not want Moral Rearmament in the All England Club”. Austin regarded this as a discrimination on the part of a small minority in the club. But his application remained unanswered and he was only readmitted in 1984, after 148 members had put their names to a letter of support.

Austin held that the spirit of sportsmanship should act as a leaven in society as a whole and he deplored the lack of it among some tennis players in recent years. Always a sportsman and gentleman himself, he had played the game with great grace. He won countless friends around the world and will be missed by many not least in the tennis world. But it was for his Christian faith that he most wanted to be remembered.

In June 1997, he appeared on BBC television’s Songs of Praise, broadcast from Wimbledon’s new No 1 Court. That July he was also enshrined in American’s Tennis Hall of Fame. His last public appearance came last June, when he led out the Parade of Champions at Wimbledon.

First published in The Independent, 28 August 2000.