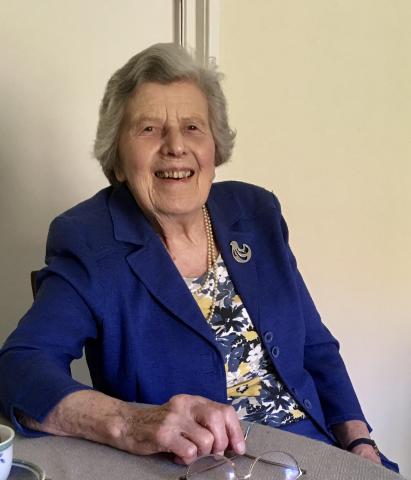 Elizabeth Carson (nee Law), who has died aged 93 in Haddington, near Edinburgh, was a woman of great talents and abilities who surrendered the possibility of a career in medicine in order to give her full time to working with the Christian-based Moral Re-Armament (MRA) movement.

Elizabeth and her late husband Melville were gracious hosts at 44 Charles Street off Berkeley Square in Mayfair, London, a residential centre of MRA (now renamed Initiatives of Change). It had been donated to MRA by a supporter who had acquired it during World War II when the Blitz had driven down property prices. Elizabeth and Melville and another Scottish couple, Lawson and Mary Wood from Aberdeenshire, were the hosts there in the late 1960s and early 1970s, while Melville was an accountant giving his services to MRA. He had been a survivor of Stalag Luft III prisoner-of-war camp during World War II, where he was a violinist in the camp orchestra.

MRA had emerged out of the Oxford Group of the 1930s and was launched by its American founder, Frank Buchman, in 1938. He appealed for a ‘moral and spiritual rearmament’ of people and nations as they rearmed militarily to fight the war against Hitler.

Elizabeth excelled in her ability to care for people and all aspects of running such a large home—hostessing, cooking, flower arranging and organizing the accommodation for countless groups who came to London to see the contemporary Christian plays of MRA staged at the Westminster Theatre. Large parties from all over the UK, including from Scotland, came to see the plays written by former Fleet Street journalist Peter Howard and the Revd Alan Thornhill, and including plays adapted from C S Lewis’s Narnia stories. Howard’s Christmas pantomime Give A Dog A Bone ran for 11 consecutive seasons.

Elizabeth Wilson Law was born in Aberdeen on 16 July 1928, the daughter of Jean and Arthur Law who were distinguished artists. Arthur taught art in Mackie Academy, Stonehaven and then Harris Academy in Dundee. He and Jean had encountered The Oxford Group in the 1930.

Elizabeth grew up in Stonehaven, Dundee, and Edinburgh, with her older brother Ken. In 1946, she secured a place at Edinburgh University to study medicine. However, that year she attended the opening of MRA’s international centre in Caux, Switzerland, which became a focus for post-war reconciliation.  At that time, she recalled, “There was a sense of urgency in building a new world.” She surrendered her place at university in order to devote herself to working full-time with MRA. “Nobody invited me. I decided to give my time and my life to that.” Her parents supported her, though with some trepidation. In her perspective, she saw home building for families as being more significant than medicine, commenting, “Back of every situation was a home.”

For seven years during her twenties, she was a guardian to three Scottish children who were siblings, at first in London and then for three years at a farm in Suffolk. Their parents would travel abroad as MRA workers. The farm was owned by Peter Howard, who had become the international leader of MRA.

One of the children, Rob Corcoran, now living in Austin, Texas, recalls: “Elizabeth was really part of our family. She was always fun, full of laughter and the joy of life, always ready to take us on picnics and other adventures.” His sister, Ann, writes: “I remember her teaching us Scottish songs, and long walks in the rain singing, ‘The animals went into the ark’. She had an infectious laugh. I can’t remember her ever being cross with us.” Their brother, Ian, remembers: “Elizabeth was always full of fun. I guess we were hard work. When we were fighting as kids she would use her faith to help us ask God what or how he wanted us to behave and to say sorry.”

Elizabeth met Melville in Edinburgh. He proposed to her on Easter Saturday and they were married at St John’s Church, Princes Street, Edinburgh in 1967. The reception was held at Winton Castle, Pencaitland.

They moved from Charles Street to live for a while in a large house lent to them by friends in a salubrious area of Wimbledon, where she loved gardening.

They travelled to Washington DC in the early 1980s at the invitation of American colleagues who welcomed Melville’s accounting expertise. They lived there for 10 years and were warm hosts to countless visitors to their apartment in Washington. They hosted visits by Rajmohan Gandhi, a grandson of Mahatma Gandhi, and his wife Usha, from India and became close friends of Muriel Smith, the celebrated African American New York mezzosoprano, who lived in retirement in Richmond VA. Smith, who died of cancer, made Elizabeth the executor of her will.

The Carsons retired to a gracious home in The Sands, Haddington, where they loved the countryside, hills, beaches and nearby fishing villages. Melville died in 2008. In her 90s, Elizabeth planned to move to sheltered accommodation. It was just as well as her house was gutted by fire two years ago, Elizabeth escaping in her night clothes. Under her urging, the firemen saved most of her paintings, many of them being her parents’ work.

Her friend Veronica Craig in Edinburgh says that Elizabeth had “so much humour and spiritual insights. She had a very open way of sharing the immediate things she was learning or feeling and a very real faith in God.” The Rev Anthony Craig says that she and Melville “exemplified the life of putting others before themselves, where their faith in a God who guides led them to befriend and care for whoever came their way.”

Elizabeth died peacefully and painlessly on Saturday 8 August, in East Lothian Community Hospital. She had celebrated her 93rd birthday on 16 July. They had no children and her brother predeceased her. She is survived by nieces, a nephew and several cousins.

This obituary was first published in The Scotsman, 24 August 2021.