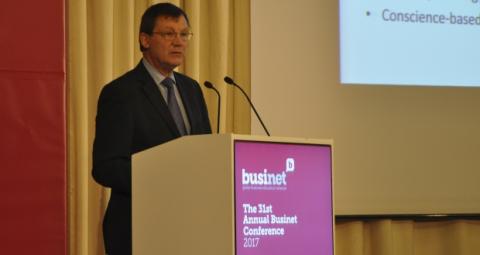 Journalist and business author Michael Smith, representing Initiatives of Change, advocated five pillars of trust in the economy when he gave the opening keynote address to the 31st annual Businet conference on 9 November. Over 200 business educators, including professors, academics, lecturers and heads of departments, took part in the conference, held in Vilamoura, Portugal, 9 to 11 November. Businet, founded in 1987, is a 'global business education network' with 102 member organizations of higher education in 31 countries.

Smith spoke on 'Imparting pillars of trust to the next generation of business leaders'. He highlighted the need for Integrity, Cooperation, Purpose, Sustainability and Stewardship, illustrating these with case studies from his book Great Company.

He asked the conference participants to roll play as if they were a class of business students, inviting them to reflect on the meaning of the word Integrity and where it begins. One person replies that it meant doing what you say you will do - walking the talk. Another said it begins in the human heart.

In Smith's subsequent interactive workshop on ethical dilemmas, four women among the 16 participants said they had been victims of unwanted sexual advances at work or at a dinner party. One said she had resigned from her job after she had been asked to falsify the accounts. They discussed how to counter such a culture of harassment. 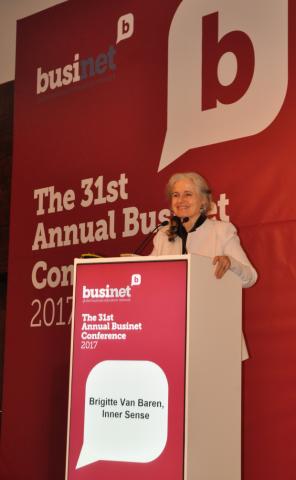 In her plenary talk, Brigitte Van Baren, founder of Inner Sense - Essentials in Leadership, from The Netherlands, emphasised the importance of silence in everyday life. 'We need to get to the soul,' she said. 'We are the only creatures that make so much noise. We are Earth people but we don't act according to the needs of the Earth. Silence gives us energy. We exist 50 per cent out of silence and 50 per cent out of activity. Then we wonder why we and students burn out.'

She quoted Albert Einstein as saying, 'The intuitive mind is a sacred gift and the rational mind is a faithful servant. We have created a society that honours the servant and has forgotten the gift.' Van Baren is organising a global forum for a peace pledge project, including water preservation, in Assisi, Italy, next June.

Other speakers emphasised the role of education in encouraging entrepreneurship, including social enterprises. Lucy Hatt, Senior Lecturer in Entrepreneurship at Newcastle Business School, Northumbria, identified five distinctive learning thresholds for successful entrepreneurship: self-efficacy, opportunity, risk, focus and impact. 'It takes courage and a degree of compulsion,' she said. 'You have to jump off the diving board.'

Paul Leys, a policy advisor from the University of Ghent in Belgium, said that nine million people had benefitted from the European Union's Erasmus student exchange programme since the 1980s. But he emphasized that the quality of students' experiences was much more important than the quantity of participants.

Smith's participation in the Businet conference arose after he spoke to three business classes at Manchester Metropolitan University in November 2016. Nathalie Ormrod, lecturer in marketing there and a Businet member, has invited him to return to the university next year to address three more classes.