How businesses are responding to the UN’s Sustainable Development Goals 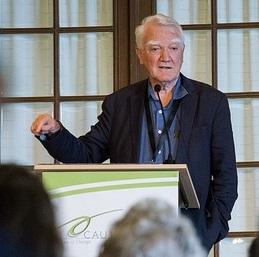 The business community had welcomed a ‘very inclusive process’ in drawing up the UN Sustainable Development Goals, said Sir Mark Moody-Stuart (left), Vice-Chair of the United Nations’ Global Compact (UNGC), speaking in Caux, Switzerland on 6 July 2016. The former Chairman of the Royal Dutch Shell Group and Anglo-American mining corporation was addressing a discussion workshop on ‘the ethical business response to the SDGs’, during the Caux conference on Trust and Integrity in the Global Economy.

The workshop was hosted by Michael Smith (pictured right), Head of Business Programmes at Initiatives of Change UK, and author of the book Great Company. Among those taking part were Laurence Cockcroft, former Chairman of Transparency International’s UK chapter, and London-based businessman Lawrence Bloom who in 2007 was the first Chair of the World Economic Forum’s Global Agenda Council on Urban Management. He had also taken part in the launch of the United Nations Environmental Programme (UNEP) Green New Deal in 2008, where he chaired its panel on Green Cities, Buildings and Transport.

Business input into the 17 goals, launch in 2015, had been channelled through the UNGC, Sir Mark said. Other inputs had come from labour organizations and civil society. This was a far cry from the Millennium Development Goals which, he said, had been drawn up with no consultation with business. 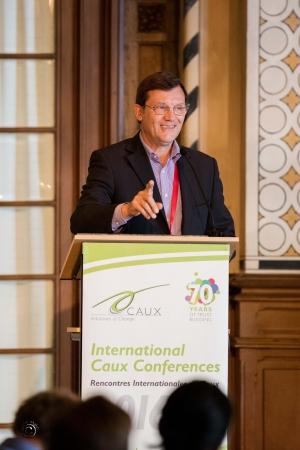 The shift in perspective to include the business community had come about thanks to Kofi Annan’s initiative to launch the Global Compact in 2000, in order to ‘put a human face on business’, and, subsequently, through business participation in the UN’s Earth Summits in Johannesburg in 2002 and Rio de Janeiro in 2012.

‘All businesses should make sure that their operations are in line with fundamental values such as those of the UNGC covering human rights, working conditions, the environment and anti-corruption,’ Moody-Stuart said. ‘These principles should form the basis on which work towards the Goals is built.

‘When studying the Goals,’ he continued, ‘all businesses will see that they have a role to play in Goal 8—decent work and economic growth—both in their own businesses and that of their supply chains. All business will also have a role to play in relation to gender equality (Goal 5) and climate change (Goal 13). Having decided which goals are impacted positively or negatively by their business, the next step is to embed these in business planning.’

A recent summit in New York had honoured ‘SDG pioneers’, 10 individuals, chosen from a list of 600 proposals, who had demonstrated leadership in their work in relation to one or other SDG. https://www.unglobalcompact.org/what-is-gc/our-work/sustainable-development/global-goals-local-business/sdgpioneers/2016