How companies benefit from ‘return on character’ 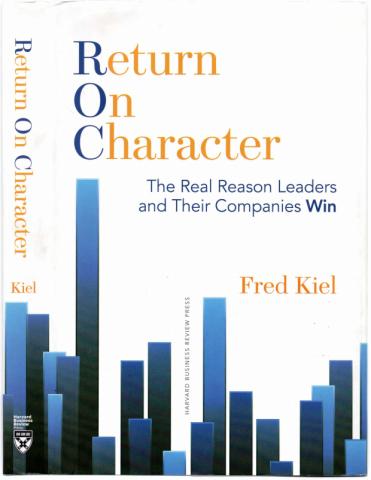 Surprise! Surprise! Those business organizations whose CEOs are character-driven outperform those organizations where the leaders are ‘self-focussed’ in their ambitions. It should be obvious, but it ain’t necessarily so. The ground-breaking thesis of this book is the research undertaken by Fred Kiel, and his team at the leadership development firm KRW International, which shows the clear link between character-driven leadership and performance.

‘I hope to inspire a movement where people demand character-driven leadership because it delivers higher value to all stakeholders—and because it’s the right thing to do,’ Kiel writes (his italics).

Return on Assets (ROA) is one thing. But Return on Character (ROC) is equally important, affecting ROA. And the empirical evidence is that ‘there is an observable and consistent relationship between character-driven leaders and better business results’. The ROA of character-led organizations is nearly five times the return on assets of companies that are ‘self-focussed’ led. This puts to rest the ‘greed is good’ myth, Kiel comments.

KRW enrolled 121 CEOs from around the USA between 2006 and 2013—leaders of Fortune 500 and 100 companies, privately owned firms and non-profits. They ended up with full data on 84 of those leaders and the annual financial results for the businesses of 44 of them.

Kiel separates out the sheep from the goats: those that are character-led are the ‘Virtuoso CEOs’ (I suppose that ‘virtuoso’ sounds less holier-than-thou than ‘virtuous’) and the rest are ‘Self-Focused CEOs’—seen by their employees as ‘often warping the truth for personal gain and as mostly concerned about themselves and their own financial security’.

But how to define ‘character’? What are its ingredients? This was the first challenge faced by KRW. They came up with ‘the four universal moral principles’ of Integrity and Responsibility (head characteristics), Forgiveness and Compassion (heart characteristics). Integrity includes distinguishing right from wrong and avoiding misleading language; Responsibility includes redressing wrongs and self-control; Forgiveness includes cooperation and mediation of conflicts (and allowing employees to make mistakes); Compassion includes empathy and affection—expressed and felt.

The good news is that these characteristics can be learnt and the book in effect acts as a training resource. Kiel outlines in detail a six-step programme of personal change. This starts with ‘acknowledging the invitation to change’; ‘discovering what you want to change’; right through to ‘rewiring your brain’ through force of habit. ‘You create neural pathways by focusing your attention consistently and repeatedly on some thought or task.’ This can lead to ‘new thoughts, responses, and behaviours you have targeted as goals in your character development’.

If this sounds like pulling yourself up by your own bootstraps, it can also be seen simply as ‘practice, practice, practice’. It is the antithesis of the notion that successful company CEOs are psychopaths, utterly self-driven and lacking in any sense of empathy. One can think of those leaders who could do with a heavy dose of character development—from self-serving bankers to ruthless presidents.

And one word of caution for aspiring CEOs: don’t allow the management board, who may only want to improve performance for a quick sale of the company, to put you off doing the necessary Virtuoso ‘restructuring’ of personal training. It may save the company from closure.