"I lost my hate at Auschwitz" 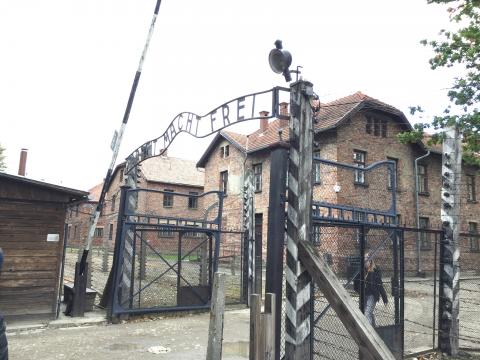 When Pope John Paul II visits the Polish town of Przemysl on the Ukrainian border next month (1991), a million Soviet citizens will cross the border to hear him. It will be the largest gathering of Soviets ever to have heard the Polish Pope, who will stress the need for spiritual values to heal Europe's conflicting nationalisms.

For Olgierd Stepan, a leading Polish Catholic layman in Britain, and his wife Aniela the event will be particularly poignant. They grew up in the area of Western Ukraine, when it was still part of Poland, from which many of the Pope's audience will come. They remember it as a rich, undulating, agricultural land - its broad rivers adding beauty to the landscape - but they have not been able to return there since 1940. World War II deprived them of their homeland, though never their love for it, and forever altered their destinies. For them, the Pope's visit to Przemysl will symbolize a healing, which they themselves have experienced, to the bitter memories of war.

To this day, Aniela finds it painful - and at first she is reluctant - to recall those war years. 'The German planes would use us as live target practice, shooting at people and cows in the fields. Cities were bombed regularly and civilian casualties were huge.'

Shortly after Hitler invaded Poland, the Soviet army moved in from the east, arriving in the area where Aniela's family lived on 19 September 1939. The family - middle class farmers, Polish, Catholic and intensely patriotic - had been used to living peacefully with their Ukrainian neighbours. But with the outbreak of war nationalistic tensions erupted and when armed Ukrainians came searching for her father one night, 15-year-old Aniela knew they would have no future in that area.

The following February, the KGB came at 5 am and searched the house for five hours. 'We were told we were too rich. Our whole status was against that of the Soviet system. They announced that we were going to be deported for 25 years. They took us to the station and put us in a cattle truck.'

Sixty-five people were herded into each truck, with no toilets and only one bucket: 'The first thing my father did was to cut a hole in the floor.' They were being taken as forced labour to the taiga, the coniferous forests of northern Russia. It was a threeweek journey. Whole families had to sleep on six-feet-wide wooden boards. All they had to eat was bread every second day, hot water and such provisions as they themselves had been allowed to bring. On three occasions they were given hot soup. The last 130 kilometres were on sledges, in frosts reaching -40 degrees C.

Over the next six months, several hundred trains carried over 1.5 million Poles, about 10 per cent of the population, into the USSR. Stalin used deportation as a method of keeping political control and providing cheap labour in remote areas, explains Olgierd Stepan. He too was 15 when he was deported in April 1940 to Kazakhstan, 100 miles from the Chinese border. 'We were so much luckier than Aniela. By then it was already spring.' Four months earlier, his father, an architect and civil servant in Lvov, had been arrested by the KGB. Olgierd never saw him again. 'He was already a sick man and died in a Soviet prison.'

Perhaps surprisingly, Aniela never hated the Russians or the Ukrainians, though her bitterness against Germany persisted. 'In the taiga I saw how the Russians suffered as much as anyone under Stalin.' And while she was there Ukrainians on her father's farm sent her food parcels which helped to keep her alive.

In June 1941 Germany invaded the USSR. With so many of his countrymen in Soviet hands, General Sikorski, head of the Polish government in exile in London, had little choice but to sign a treaty with Stalin. It enlisted the Polish army on the side of the Soviets and gave an amnesty to Polish civilians in the Soviet Union.

Aniela immediately headed south aiming to join those who were forming a new Polish army. They were gathering near the Caspian Sea in an attempt to head off Hitler's moves to control the oilfields of northern Iraq. But the Poles were hardly a fighting unit. Too many were suffering from malnutrition and some 15,000 Polish officers had already been massacred by Soviet troops.

Now nearly 18, Aniela was eager to enlist with the Polish army but, judged too weak, was sent instead to a school in Palestine. Going on to the American University of Beirut, she met Olgierd who had arrived in the city to study architecture. On Easter Sunday 1945 they 'looked into each other's eyes' for the first time. They were married in Beirut, on Boxing Day 1946, and their first son Kazik was born there. But after the state of Israel was created in 1948 they felt Beirut was no longer a safe place to live. Nor could they return to their homeland which, as a result of the treaty of Yalta, had become part of Soviet Ukraine. So in 1950 they settled in London.

Olgierd arrived in London determined to put his Polish roots behind him. 'I wanted to be a European, a cosmopolitan.' But life at first was not easy: his French diploma in architecture was not recognized and he applied unsuccessfully for over 50 jobs. He worked as a porter at London's Waterloo Station before resitting his exams. Eventually, in 1961, he became an architect in the Ministry of Education where he spent the rest of his career. His department pioneered a new approach to school building design and, for him, serving the younger generation was 'to bring my professional life and my spiritual life into harmony'.

In 1956 the Kremlin sent in tanks to crush the Hungarian uprising. 'It was my birthday,' he recalls, 'and we were supposed to be celebrating. But we were crying. The depth of my emotion came as a great surprise to me. But I realized that that was my true self. All my life I had made my own decisions. But two things were gifts from God: the moment of history in which I was born, and the language in which my mother talked to me. I realized I had to respect God's choices and live not as an escapist, but with my culture and nation.'

As a refugee he now felt he needed to cherish his roots all the more - especially against the 'onslaught of an anti-human system'. It was not a question of advocating a narrow nationalism 'which can be intolerant' so much as 'offering the gift of my birth to humanity'. He felt he was being called to be 'a voice for those who are downtrodden and betrayed'.

The experience led him into his involvement with the Polish Institute of Catholic Action, of which he was Chairman from 1968 to 1986. 'We were charged by Cardinal Wyszynski to represent Polish communities throughout Western Europe.' As such Olgierd was one of a small committee of leading Catholics who prepared the Pope's visit to Britain in 1982.

In 1965, their 17-year-old son Kazik was struck down with cancer of the spinal chord. He developed pneumonia and almost died. But the fever suddenly lifted and the doctor, though still holding out no hope for Kazik, supported the Stepans in taking him to Lourdes. There, he sat up in bed, ate heartily and then got up and walked. It happened to be the anniversary of the death of the Polish concentration camp victim St Maximillian Kolbe, to whom the Stepans felt a particularly close affinity.

Miraculously, they believe, Kazik was completely cured. Aniela describes how her 'soul sang out' while the doctor said that it was the greatest moment of his medical career.

Kazik's illness had a profound effect on Olgierd. Till then, he admits, he had been 'not a little jealous' of the attention and affection that Aniela lavished on their four children - at his expense, he felt. In reaction he had become over-demanding of Kazik. But as he became increasingly paralyzed Olgierd 'had to learn to become a servant to him'.

Olgierd now sees his change of attitude towards his son as a parable for those who have known nothing but the demands of totalitarianism. For years, he says, people have been manipulated by the State for a cause that has proved to be false. 'We need a very different model of human relationships - that of serving one another.'

The first churches, he adds, grew out of loving communities that proved to be stronger than the Roman Empire. And if the Soviet empire is now collapsing, he also prays for its 'conversion' through the influence of such communities. He sees Moral Re-Armament, with its centre at Caux in Switzerland, as playing a particular role in this. Speaking there last year at a conference on East-West relations, he called for a healing of the 'moral consequences of Yalta' - the demoralization in people - as much as its economic consequences.

Two years ago, Aniela returned to Poland for the first time since her childhood. A priest urged her to visit Auschwitz where tens of thousands of her countrymen had died. At first she refused, frightened of the evil that the concentration camp represented. But the priest insisted. She describes her experience there in hushed tones, almost a whisper:

'After so many years, it still terrified me. The priest took me to the wall of death. We saw the mountain of discarded shoes that still remain there, the mountain of shaven hair. Suddenly I saw the whole history. I felt I had to get out. Yet I couldn't move, I was paralyzed.

'Opposite the wall of death stands a huge cross where public hangings used to take place. I turned and saw it. I felt, like Christ, completely broken. I was so frightened of the hatred of the Germans that was in me. They had been for me the worst symbol of evil. It had been organized on a mass scale that was unbelievable.

'I cried out, "My God, my God, help me." Suddenly I saw the outstretched arms of Christ. I heard his words, "Father, forgive them for they know not what they are doing." The words were repeated, and then, "I died for them. I died for them." For me it was the greatest victory - not mine but his. From being completely beaten I became a totally new person. At that moment, when I knew I was reborn, the gratitude I felt to God was overwhelming. But what is more important is that I no longer hate. Now I pray for the Germans each day.'

Olgierd Stepan believes that, with the lid of totalitarianism lifting in the East, there is a danger that people will pursue a hedonistic materialism - or that, 'instead of proclaiming the goodness of God, extreme nationalistic hatreds will emerge'. The reconciliations the Pope will pray for in Przemysl next month will also require 'a grace of the same order, though on a far wider scale' than that which Aniela experienced in Auschwitz. The source of that grace, says Olgierd, remains the same for everyone.

First published in For A Change magazine, 5 January 1991