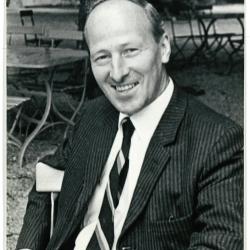 Journalist, editor, poet, Christian apologist and campaigner, Ken Rundell, who has died aged 90, came from a humble Cornish background, the son of a builder who moved all over Cornwall. By the time Ken was 21 they had lived in 21 houses, which his father had built or restored. So it is not surprising that, in his later years, Ken relished restoring an old apartment building, on the bank of the Fontanka River in St Petersburg, Russia, where Tchaikovsky had composed the Nutcracker Suite in 1891. Rundell turned it, in 1997, into a centre for a Christian community called Agora.

Revolutionary in concept, bringing together people of different faith backgrounds--Orthodox, Catholic, non-conformist and those of no faith at all--into dialogue, Agora was Rundell’s brainchild, supported by his second wife Pirkko Ristolainen, a Karelian Russian. Rundell believed that Russia’s post-communist democracy needed to be strengthened by the foundations of her spiritual heritage. Agora would provide a forum for this.

Today, it is a small but thriving community, with close connections with the Navigators, the Christian student movement. Rundell is remembered with great affection by his Russian friends. Geoffrey Rowell, the Church of England’s Bishop in Europe, stayed at Agora on his first visit to St Petersburg as Bishop in 2003. He remembers Rundell meeting him in style in a “large and long Zim car, when he was already in his senior years. He had enthusiasm for old cars and for what he was doing to transform the old apartment building. He sought to provide a place of meeting and reflection on human and Christian values and also provide a place for the English congregation to meet when worship again became possible at the time of perestroika.”

Born in Par, near St Austell, in 1919, Rundell excelled at school, winning a place at Truro Grammar School, followed by a scholarship to Wadham College, Oxford, where he read classics. The Cornish poet and historian A L Rowse invited all the Cornish students to a dinner, telling them to stick together, as it was hard to trust the English! Rundell graduated in two years before enlisting in the army in 1941.

The Agora community built on Rundell’s early Christian experience as an Oxford student in the 1930s. There he ran into the Oxford Group, the Christian movement founded by Frank Buchman which went on to be known as Moral Re-Armament (MRA) and is now called Initiatives of Change. At the time Rundell had been a convinced pacifist, in the then Methodist tradition espoused by Donald Soper, and Rundell had been vetted, with all the necessary papers, as a pacifist to avoid call-up. But he found in the Oxford Group people who were committed to “remaking the world”, and its vision, in the midst of the chaos and compromises of impending war against Hitler, rang true with Rundell.

He came to realise that evil needed to be resisted, and that the war was just. Turning his back on his pacifist conviction, he enlisted in the army. As a lieutenant, he won an MC for his bravery in facing the enemy near Rethem, in Lower Saxony, during the allied advance into Germany in 1945. Field Marshall Montgomery pinning the medal onto him, the citation reading: “Lt Rundell showed complete disregard for personal danger and his determination and courage were an outstanding example to his men.”

Rundell’s prowess as a marksman during the war was less spectacular than his personal courage and, afterwards, he would tell of his frustration at firing repeatedly on a group of German soldiers picking blackberries on a hill some way away. He felt insulted that they never noticed him, let alone fled in terror. It was the closest he ever got to harming anyone. His pacifism, instead, was honoured in his medal for saving the lives of his men.

Like other war veterans he returned to Oxford in 1946, aged 27, to read theology, decorating his room with captured SS insignia and opening his letters with a dagger “liberated” from a German officer who had been driving Goering’s Mercedes. Rundell became the editor of the student paper Isis.

On graduation he joined the Institute of Journalists, and enlisted full time with the Oxford Group--a hazardous step in faith which saw him abandon any hope of material gain; all its members worked as volunteers without salary, believing that “where God guides he provides”. Such faith and prayer would have to suffice.

Despite or indeed because of this, it was an adventurous life. He worked as a journalist on New World News, an international magazine published by MRA, which had opened its international centre for reconciliation in the Alpine village of Caux in 1946. Joan Tyson, a graduate of the Chelsea School of Art, worked in the magazine’s art department and they were married in 1952.

They travelled to Nigeria--their son Peter, born in 1953, with them--where an international team filmed Africa’s first-ever colour feature film, Freedom, with a Walt Disney cameraman volunteering his services. After several years in Africa, Rundell became the editor of New World News. It was a glossy magazine with striking colour photographs, published in several languages from Geneva.

Their second son, Michael, remembers growing up during their “blissful” time in Switzerland, “swept happily into a world peopled by the most amazing cross section imaginable--trade unionists, kings, politicians, writers, dreamers and artists--they all gathered round the tables in our communal home in Switzerland. I watched as famous sportsmen served tables to students and students served tables to cardinals, and then I watched as the same cardinals took their turn peeling vegetables for everyone else. It was a fabulous childhood; unconventional, creative, democratic, impossibly positive and genuinely worthwhile.”

“Remaking the world”, by a change in people’s lives, was assisted by MRA’s purchase, in 1946, of the Westminster Theatre in London. Doing big things for God was part of the MRA ethos, and the Westminster became London’s principal theatre of Christian drama. Rundell was one of its directors, where he pioneered an educational programme --the Day of London Theatre-- during which school parties from across Britain would come to a matinee and hear a talk from members of the cast and crew about theatre production.

With few personal resources, he and Joan bought a family home in Kensington, thanks to the financial support of countless friends. Another trademark of his life, Michael recalls, was that he was completely un-judgemental of others. “I well remember the time when I returned home from Oxford with pink spiky hair. He accepted my new look and never really asked why--not because he was uninterested but because it was just not important.”

Returning to Cornwall, Ken nursed Joan through a long illness before her death in 1982. He moved to Finland that year with his second wife Pirkko, before founding Agora in St Petersburg. There they grew roots and made connections all over the city, as the Agora community offered lectures, exhibitions and fellowship to its growing Russian circle. For Ken Rundell, each person he met was “a saint in waiting,” says Michael. “Each person had unlimited potential and each person was a treasure trove of undiscovered talent. What he wanted for all of us was to use those talents in the very best way possible - to help create an earth where hunger and greed were things of the past.”

A shorter version of this obituary appeared in the Western Morning News, Cornwall, 22 April 2010.