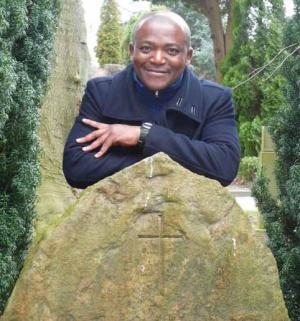 Ghanaian lawyer and adventurer Kojo Jantuah undertook an extraordinary odyssey across the Sahara Desert to discover his ancestral roots in Europe. His trek across the desert from his home in Ghana to try to reach Zealand in Denmark, the home of his colonial ancestor, is told in his book Odyssey to Elsinore. It was published in July just days before his unexpected death at the age of 52.

The book has been compared to Arthur Haley’s Roots and Jantuah’s epic journey is similar in scale to that of the thousands of migrants who today take the perilous route across the Mediterranean to Europe. The journey also gave him insights into the impact of the trans-Atlantic slave trade, including the complicity of African chiefs and Arab traders in capturing and selling slaves to Europeans. The broadcaster Clare Balding interviewed Jantuah about his compelling journey in a half-hour radio interview recorded in Copenhagen and broadcast in her Ramblings series on BBC Radio 4 in September 2005.

Kojo Agyeman Jantuah’s mother came from Keta in south-east Ghana near Togo. He was 11 years old when she told him that the person he thought of as Dad was his step-father. He was a diplomat who was posted to Israel where Kojo spent his early years. His biological father had been the Minister of Agriculture in the last cabinet of President Kwame Nkrumah. He now wanted his son to come and live with him and his family.

It was an unhappy arrangement and Kojo found himself confused about his identity. He returned to his mother’s home now in Accra but couldn’t settle back there. Brought up to stand on his own two feet, he left home without telling anyone shortly after his 20th birthday in April 1983.

He and a friend travelled north to Koupela in Burkina Faso with the intension of crossing the Sahara to get to Europe via Libya. But a German tourist who had been robbed by bandits persuaded them that it was too dangerous. So they returned to Ghana via Togo, travelling mostly on foot. The experience spurred him to earn enough money to try again to reach Europe. His mother, by then Superintendent of Schools in Accra, found him a teaching job in a primary school.

When his maternal grandfather died in October 1983, Kojo was surprised to meet relatives with unusually light complexions. His mother explained that his great-grandmother’s grandfather was Danish. Her name had been Augustine Ablewoga Swedstrup, and Jantuah was to discover that his ancestor, Johan Wilhelm Svedstrup, had been the Commandant of Fort Prinsenten in Keta, then in Danish Guinea, in the 1840s. He had been posted there to enforce the abolition of the slave trade, and had taken a Ghanaian wife. Kojo was all the more determined to get to Europe to find his Scandinavian roots.

In January 1985, he and an acquaintance set out across the Sahara, a gruelling journey that took them on routes that Arab traders had used for centuries to transport slaves north to the Mediterranean. It took them a month to get to the Libyan border. They covered the final leg on foot through desolate terrain, with a Tuareg guide. But when he deserted them they lost their way and thought they would die in the scorching heat.

Exhausted and gripped with fear, Jantuah was sustained by Psalm 23 in his pocket Bible: 'Yea, though I walk through the valley of the shadow of death, I will fear no evil, for thou art with me; thy rod and they staff they comfort me.' Making their way slowly they turned a corner around a huge bolder to see a group of Westerners ahead of them. One of them pointed them in the direction they should go. 'I realized that I could trust the inner voice that was leading me in life,' Jantuah later commented.

Jantuah worked for six months on a farm outside Benghazi 'under conditions akin to slavery'. He earned enough to fly to East Berlin where his uncle was the Ghanaian Ambassador. A veteran diplomat, he persuaded Jantuah to return to Ghana and it wouldn’t be till 2003 that he eventually travelled to Denmark to meet his relatives and see the gravestone where Johan Svedstrup is buried.

Meanwhile he borrowed the air fare to travel to London in 1994. He lived with a friend in Leicester and studied law there at De Montfort University. While there he volunteered as an intern at an international conference in Caux, Switzerland. African Americans taking part there invited him to speak about African history, including the slave trade, to young offenders in a detention centre in Richmond, Virginia. According to the official in charge this had a marked effect on them.

This spurred Jantuah to write his Masters dissertation on 'The politics of reconciliation concerning the transatlantic slave trade', and organise a conference on the theme at Goodenough College in London in 2001. Controversially, he worked to establish 'a doctrine of collective culpability as a basis for reconciliation and development'.

Inspired by the Initiatives of Change movement in Caux, he developed a Healing History course for adults of all backgrounds which focussed on 'identity, values, understanding and leadership in the global village'. It used African principles of sankofa (recovered histories) mpatapo (reconciliation) and what he called Saharacoaching (identity equals oneness).

In 2003, he found information about Svedstrup on the Internet and was able to track down his Danish relatives for the first time. This also led him to partner with UNESCO in Copenhagen on its Transatlantic Slave Trade schools project.  Commuting from Denmark to London, he became a life-coach for school and college students of African and Caribbean origin in Bromley and Croydon—the first project of its kind in the UK. He also founded the Jantua Svedstrup Institute to facilitate 'the reconciliation of identity and development'.

He struggled financially throughout his life but was sustained by his faith, retaining a laid-back demeanour and a ready humour. He died from a heart attack in his sleep and is survived by his daughter, Bianca, whose mother, Bev Johnson, he had met while at Leicester University.

First published in The Independent, 8 September 2015