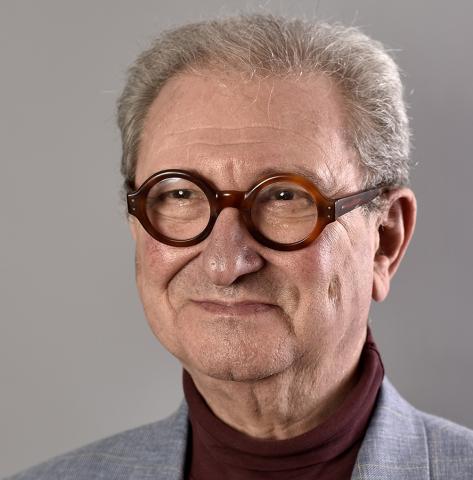 Whenever you stay in a hotel anywhere in the world, chances are you will be offered the choice of having a clean towel every day or keeping the towel you have already used. This helps the environment by reducing laundry, detergent and water use. It also cuts hotel costs, so everyone wins. For this simple but effective initiative the world has Lawrence Bloom to thank.

The grandson of East European émigrés to London, he had made a fortune as a chartered surveyor, running his consultancy, Lawrence Bloom King and Co (subsequently Bloom King Main). The firm soon became a leading small agency in the City of London and by 1974 Bloom had bought a seven-bedroom house in Hampstead and had a 500 SEL Mercedes parked outside.

Yet, as he recalled, he sat in his car one evening and asked himself: “Is this it? Is this all there is to life?” He had arrived at a place where many aspired to be. Yet he was still anxious. “I realised that anxiety was like a coat hanger and the clothing I had hung on it, up to the moment I bought the mansion, was, ‘Will I ever make it?’ and the clothing I hung on it after I made it was, ‘Will I ever keep it?’”

Having made his fortune he feared he would lose it. “That was a trauma for me because I realized something very deep about human nature, that there is a part of us, the ego, that is continuously feeling unsafe.”

To compensate for this, he went on a drinking binge that, he said, lasted for three years. “It wasn’t very efficient or effective—nearly ruined my liver—but it brought me to a few home truths. There was a part of me that wasn’t been nourished. I call it my soul. Other people can call it what they like. But it’s something deep inside us that needs to be nourished.”

By the mid-1980s, Bloom was a director of Land Investors, where he was responsible for building the new headquarters of the National Bank of Kuwait in the west end of London, and the Bayerische Landesbank (Bavarian State Bank) in the City. He became Managing Director and Deputy Chairman of the Land & Property Trust where he managed its £150 million property portfolio.

Yet he still wasn’t getting into what he called ‘right action’. This meant switching his career. He was head-hunted by InterContinental Hotels, one of the world’s largest hotel chains, in 1990 to join their management board. The Japanese owners at the time put him in charge of the group’s $3 billion real estate portfolio. Supported by the technology services department, he went on to create the group’s three-volume environmental manual.

Three paragraphs in the manual had a profound impact on the global hotel industry: the suggestion that guests could keep the same towel for more than one night, rather than having a clean one, if they so wished.

The idea received fierce opposition from other board members who were concerned about hotel standards and the bottom line. The Chief Operating Officer told him: “You are here to increase the value of our properties, not come up with fluffy ideas.” Bloom, fearful for his position on the board, found himself feeling nauseous every morning for three months.

Luckily, he was supported by John van Praag, the Dutch chief executive. The manual was duly published, and Bloom promptly proposed that they should share it with their competitor hotel chains, as being the right thing to do. The board rejected the idea, saying the competition should write their own manuals.

Van Praag knew Prince Charles as a person with environmental convictions. He took the idea to the prince who promptly invited the heads of the world’s leading five-star hotel chains to meet with him at his country home, Highgrove. He presented them with what became known as The Prince’s Manual and they could hardly refuse. It spawned the International Hotels Environmental Initiative, founded in 1992 by a consortium of chief executives from ten multinational hotel groups.

When Kofi Annan, the former Secretary General of the United Nations, heard Bloom tell his story to an international business forum in Caux, Switzerland, in 2013, he said he was so impressed by it that he would set aside his prepared notes and speak from the heart himself.

That year, Bloom stayed in the Novotel in Beijing, owned by the Paris-based Accor hotel group. He was delighted to discover Accor’s environmental initiative. For every guest who kept the same towel for more than one night, Accor would plant trees in line with the cost savings. Their aim has been to support sustainable agriculture through agroforestry projects in 25 countries. The target was to plant 20 million trees by 2021.

A further energy-saving initiative was to have a slot in the bedroom wall into which hotel guests inserted their door key to connect the electricity, thus avoiding leaving lights on accidentally on departure.

Lawrence Clive Bloom was born in London on 8 June 1943. His parents were Sydney and Jackie Bloom and he was educated at Whitefield school in Barnet. He met and married Janet Spector in London in 1968 and they had three children: Rebekah is a managing director of the British Hemp Alliance; David is an intellectual property insurance broker; and Joanna is a mindfulness teacher. They were divorced in 1993.

After leaving InterContinental Hotels in 1993, Bloom became secretary general of the Be Earth Foundation, a UN intergovernmental organization which advises on implementing the sustainable development goals. He was also Chair of Be Energy, a green energy company specializing in developing biofuels, from waste and plantation timber, with a commitment to the “triple bottom line”—people, planet and profit.

He was a co-founder in 2019 of Dakia Global Enterprise, the holding company of a joint venture with the Universal Music Group which aim to create and build music-themed hotels as concert venues.

Bloom was also the chairman of the World Economic Forum’s global agenda council on urban management in 2008. That same year he was also Chairman of the UN Environment Programme’s green economy initiative, green cities, buildings and transport council.

In recent years, he worked in Mexico, on behalf of Dakia Global, which planned to develop a hotel and music concert complex that would support the local economy, providing a market for locally grown food and other products.

While there Bloom suffered from complications stemming from the coronavirus. His daughter Rebekah and close friends nursed him in his hotel room in Tepoztlán for the last three weeks of his life..

A philosophical and spiritual man, his daughter Rebekah joked that he was 'the roving rabbi', though he was never ordained.