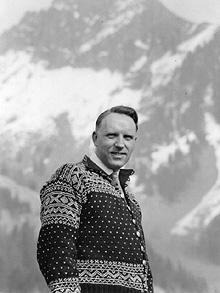 Leif Hovelsen, the Norwegian resistance fighter, who has died aged 87, was captured and tortured by the Gestapo but determined on reconciliation, not revenge, after the war. Later he became a friend and confidante of Soviet dissidents struggling against their own totalitarian regime.

The story of Hovelsen's torture and subsequent forgiveness of his German captors is told in his book Out of the Evil Night (1959). He was 19 when, on June 9 1943, the Gestapo burst into his family's Oslo home. He had been betrayed by a colleague in the Norwegian resistance and, as he was led away, his mother called out: "Leif, never forget Jesus!" Though embarrassed at the time, this advice stayed with him for the rest of his life.

He was held in solitary confinement at the Grini concentration camp, and over the next two years was taken occasionally to Gestapo headquarters in Oslo for questioning. During one interrogation he was beaten so severely that his hearing was impaired. His crime had been to carry short-wave radio transmitters, used for keeping in touch with Britain, to resistance fighters as far as 100 miles outside Oslo.

Threatened with execution, Hovelsen was offered freedom if he would inform on his friends in the resistance. But "I felt in my heart there was no other option than a clear 'No'. As I was about to take this deep resolve, something extraordinary took place. I experienced the contradiction of being truly free at the unique point of having lost everything."

By chance Hovelsen escaped deportation to Sachsenhausen, which resulted in the deaths of dozens of fellow prisoners. When he was finally liberated in 1945, British troops offered him the chance to punish his captors; Hovelsen ordered German officers to undertake the punishment drills to which he had been subjected, but his instinct for retribution upset him. "I wanted to fight for right and justice, but this was lust for revenge," he wrote. "There was no excuse".

When he offered forgiveness to one Gestapo officer who had tortured him, the man said nothing "but his body shook all over". Just before his subsequent execution, the torturer had asked to take Communion. Hovelsen was to write: "When I answered the Nazis with the same treatment meted out to me, their spirit had conquered me. When I forgave I had conquered National Socialism."

After the war his reconciliation work included the issue of reparation payments by Germany. Thousands who had been concentration camp prisoners demanded compensation. How much, however, became a controversial issue. Hovelsen saw it as a chance to rebuild relations with Germany. He summed up a possible compromise in five steps which he presented to Norwegian Prime Minister Einar Gerhardsen and the German government in Bonn. The result was a meeting in Oslo, where a Reparations Treaty was signed in 1959.

Leif Hovelsen was born on November 1 1923 in Oslo. His father was a professional skier and Leif too enjoyed the sport. As a university student he acquired a radio and began tuning into broadcasts from London, which he translated and distributed. Soon he began supplying receivers to others.

After the reconciliation between Norway and Germany, Hovelsen began to focus on the plight of Soviet dissidents. In due course he became close friends with the political activists Vladimir Bukovsky, Vladimir Maximov, the sculptor Ernst Neizvestny, and the human rights activist Andrei Sakharov.

Hovelsen campaigned for Sakharov to win the Nobel Peace Prize in 1975. Meanwhile Neizvestny, who created Nikita Khrushchev's tombstone, wrote the foreword for Hovelsen's book Through the Walls – Ways to Reconciliation (2006). "When I met Leif Hovelsen we became friends immediately," the sculptor noted. "We realised that the most important thing in this life is human dignity."

First published in The Daily Telegraph, on 23 October 2011