Making marriage work... for the sake of the kids 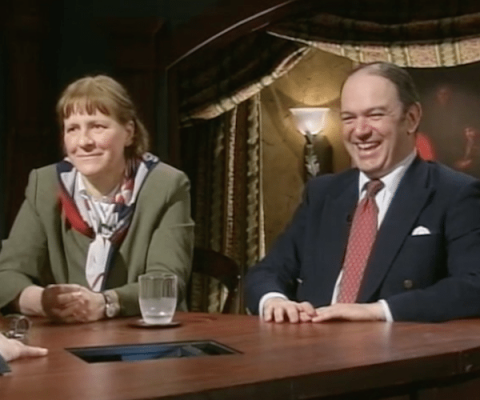 It gets better every year. Or worse by the minute. It depends on how you look at it and what your experience is. But, despite all the pressures on it, marriage still flourishes.

In Britain, only one woman in 20 and one man in 11 remain single by the age of 40. In America, Life magazine reports, divorce has levelled off after a 30-year upsurge, and adds: 'Fidelity promises to be the watchword of romance in the Nineties. How times change.' In a recent opinion poll, says the magazine, '74 per cent of women and an astonishing 80 per cent of men ranked companionship higher than sex as a reason to marry.'

Yet Cupid's arrow doesn't always fly straight. Up to a third of all marriages in Western countries break up. In Britain, the divorce rate—the highest in the EEC—is still rising, and legal costs alone add up to GBP2 billion a year. In West Germany half of all marriages in the big cities fail.

There is hardly a family anywhere, 'from teeming housing estates to royalty or bishops' that has not been affected by family breakdown, says Joanna Bogle, who with her husband Jamie (photo) is organizing the XVIth International Congress for the Family in Brighton, England, this month.

The family, she points out, 'is our first meeting-ground with other human beings. How do we get on with those who should be nearest to us? If there's something wrong between us and them we are not likely to get on terribly well with anyone else.'

The family is where we learn our fundamental human relationships. Get on well at home and we are more likely to get on with the boss at work, or with our mates on the shop floor. A row over the cornflakes can mean that our performance in the boardroom or across the negotiating table is impaired. And if a politician betrays his marriage vows, how can electors trust his promises to them?

Jamie Bogle suggests that a host of social evils can be traced back to breakdown in the family: Aids, child and drug abuse, teenage suicide, runaway children, a rocketing crime rate, and violence in the home.

They will all be on the agenda of the Brighton congress, the latest in a series which started in Australia 12 years ago. Originally a Roman Catholic initiative, it has since evolved into a broad-based movement, including people of all faiths and those with none. 'We don't want to exclude anybody on the basis of their particular beliefs,' Bogle says.

A former British army officer, Bogle attended a 1986 congress in Paris. 'I didn't see anything of Paris because I was so fascinated.' But when he and a group of friends met over lunch in London to discuss who could organize a similar one in Britain his initial reaction was, 'Not on your life'. Yet, Joanna says, 'we were also open to the possibility that the voice of our conscience might just be the right voice.' Evidently it was. 'Doors opened all over the place', including to the Brighton Centre, which they were offered free of charge.

Joanna Bogle is a journalist and former Conservative councillor who was tipped for a high-flying career in politics. Attending a family congress in Bonn last year challenged her, she says, to put the issues of the family before her own career, though she insists that 'if you make your family life a priority', not as a 'sloppy' decision but as an unselfish commitment, then 'God will not allow your talents to be wasted'.

The Brighton congress, which has the support of church leaders, the Chief Rabbi and a cross-section of MPs, will attract several thousand people to hear some 50 international speakers concerned with family issues. They will cover a wide range of topics from Aids and teenage sex to post-abortion syndrome, population control, family debt and care of the elderly. Experts from 13 countries will be joined by Mother Teresa of Calcutta and the Princess of Wales, who is Patron in Britain of Relate (formerly the Marriage Guidance Council).

'We need to find a securer way of helping our children,' says Princess Diana, 'to nurture them to face life as stable and confident adults.'

This is a crucial point, for too many children become tragic victims of family breakup. That is why Britain's Lord Chancellor, Lord Mackay, hopes to see a decline in divorce. He wants to shift the emphasis in the divorce laws away from establishing blame towards a deeper concern for the welfare of children involved.

Many hurts would need to be healed. One in seven British children live with only one parent—double the 1971 figure. Divorce, says Jamie Bogle, has not only left young people with an 'information gap' about how to form lasting relationships. It has also dramatically increased the number of couples living together before marrying—as high as 70 per cent—'because they fear making a commitment to marriage'.

Last year a quarter of all births in Britain were illegitimate, Europe's second highest rate after Denmark. Bogle says it is far from the truth to suggest that such children are born to stable 'family' units. Surveys show that mothers often register a second child born outside marriage under a different father from the first.

A West German opinion poll among 17 to 21-year-olds showed that though 80 per cent thought a happy family was one of the things they most longed for in life, over half did not believe it possible 'because there is no lasting love'.

Michaela von Heereman, who helped to conduct the poll, says she was appalled by its findings. 'These young people enter marriage with the reservation that it will not work. Therefore they don't have the ability to overcome conflict. It's like a cat chasing its own tail.'

Mrs von Heereman, who has six children aged from 11 months to 17 years, is on the board of the Parent-Teachers Association of North Rhine Westphalia, and helped organize the family congress Joanna Bogle attended in Bonn last year. It was a week-long event which attracted 2,500 people each day. Its aim, says Mrs von Heereman, was to awaken in young parents the importance of passing on family values to their children. For, 'what really holds a family together is not material security but unity in values.'

Another opinion poll showed that twothirds of parents under 40 'those in the middle of educating their children' want them to be tidy, hard-working and punctual, and to look after the weak. But they do not want to influence their children's reading, what they see on television, or their political and religious beliefs. 'And yet these represent our whole value system,' von Heereman says. Those polled put the 'ingredient of faith' 17th on their list of educational priorities. 'We are sending out young people completely unprepared for the world - and their children will grow up in a vacuum of values,' she comments.

It was the need to prepare people for marriage and family life that led Angela de Malherbe to organize the 1986 congress in Paris, which attracted 6,000 mostly young people. She had been teaching the catechism to 14- to 16-year-old boys in a Paris school when they asked her to talk to them about love and marriage.

Young people, she says, need to be educated in love from the earliest age, 'and that involves a sense of sacrifice, of giving up something one would like for the good of the other.' The marriage bond has been wounded both by the consumer economy - 'where one wants everything immediately' and also by an anti-life mentality that begins with sexual exploitation, continues through artificial contraception and ends with abortion.

If love, rather than exploitation, is to survive into the next century then there is a need to 'bring couples back into the natural law of the Creator'. Mme de Malherbe is an advocate of natural family planning because, she says, it calls for 'gentle discipline' and a deep respect for womanhood. As one doctor comments, 'Men can behave like animals, even to their wives.'

But what about couples for whom love has grown cold? 'I have always believed marriage to be a sacrament,' she replies, 'which gives us the grace of God to start again every time there is difficulty. In my own marriage I have found the sacraments of the Eucharist and confession extremely helpful. It is a way of coming together again in asking forgiveness of one's husband and starting anew. The wonderful thing is that when you do have the courage to come out of your little sphere where you are all caught up in your pride and say, "Okay, I'm sorry", then your marriage bond takes on a greater strength.'

Jamie Bogle also stresses the need to 'look inwards... You can't expect the other person to change if you aren't going to change yourself. That is a profound experience.'

'Communication—or the lack of it,' he says, is the single most important family issue—'communication of the right sort, at the right level, involving all the values that we hold dear.' As the psychiatrist and broadcaster, Professor Anthony Clare, comments in London's Sunday Times, 'Better to communicate a little and often, than seldom, and then in a great blowout.'

But, Bogle warns, 'Some families crack under pressure that is not of their own making. Many young people begin their married lives with idealism and then come up against enormous problems.' Family debt, exacerbated by such issues as high mortgage rates, causes more marital breakdown than either drugs or alcohol.

'Any congress on the family,' adds his wife, 'is entitled to rap a few government knuckles' over issues like the tax system, which should be geared towards the family rather than just the individual. Yet political action is not the aim of the Brighton congress. Rather, says Joanna Bogle, the question is how the issues 'speak to your conscience'.

No one is pretending that family life will become a bed of roses. For children, at the best of times, can be, in turn, the most lovable, demanding and crassly difficult of creatures—and so too can their parents.

Yet it is worth remembering when things get tough in our families that our sense of worth, where we come from and who we identify with—our security and confidence in life—depend on our fidelity to each other. In our long-term commitment to our families we find nurture, healing and fulfilment. And if that is true for ourselves, it is much more so for our children. The roads they follow in life still remain their choice. But, in the long run, our love and faithfulness is the best we can offer—for the sake of the kids.

First published in For A Change magazine, 7 January 1990