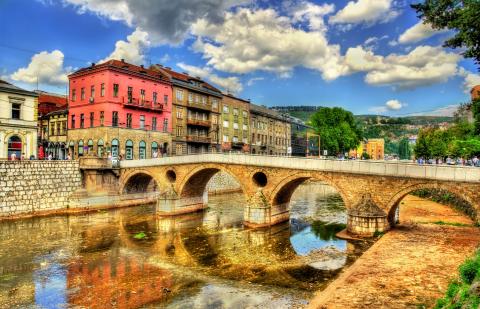 Sarajevo still bears the scars of war, five years after the signing of the Dayton peace agreement, on 22 November 1995, which ended the three-year siege of the city by Serb artillery. For 1,395 days, Serb guns and tanks in the surrounding hills had bombarded Sarajevo. Look up into those hills now, in a rain-drenched dusk, and they still look darkly ominous. It was the longest siege in modern European history, some 500 days longer than that of Leningrad by the German army during World War II.

Today, gutted buildings remain a sombre memorial to the war. The parliament's main tower is burnt out, standing just across the road from the Holiday Inn, from where the first shots of the war were fired into a mass demonstration, killing a young nurse. The Hotel Bristol, on the road to the airport, stands like a transparent ghost, all its windows shattered. There is hardly a residential or office high-rise which is not pock-marked with shell and bullet holes. 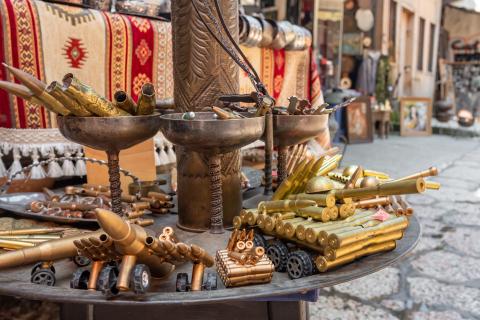 In the craft markets, in the medieval part of the city, they have put the spent shells to good use. Polished up as shining brass and hammered with decorative patterns, they sell as vases and momentos of the war. More poignant reminders of the war are the 'Sarajevo roses' on street pavements: red splatters of concrete marking the spot where blood was shed by people killed by sniper and shell fire--in the horrific market day and bread queue massacres, and elsewhere. Eleven thousand Sarajevans lost their lives during the siege, including 1,500 children. Young tour guides remember their teenage friends who were shot dead. Tracks where athletes competed during the 1984 Winter Olympics are now graveyards.

Near the airport, the collapsed wreck of the 10-storey Oslobodjenje building, from whose basement the newspaper defiantly and heroically kept publishing, remains a symbol of Bosnian resistance. A security guard at the paper, Adnan Hadjimahmutovic, recalls first seeing a Serb tank, just 150 metres away on a ridge, turn its barrel on the building. First one side collapsed under the shelling. Then the other. 'We had to stay in the basement for days. It was too dangerous to leave.' Is it possible to forgive the Serbs, I asked him? 'Forgive, but not forget,' he replied instantly.

Some of Bosnia's media, including the award-winning Oslobodjenje and the main TV station, were renowned for their non-partisan reporting throughout the war. Outside cosmopolitan Sarajevo, the local press was far more partisan. Journalists lied for their side, says Bosnian TV journalist Senad Kamenica.

Kamenica was one of the moving spirits behind an international conference of journalists held, from 28 September to 2 October, in the Holiday Inn, where the world's correspondents were based during the war. Kamenica had called for the 'media world assembly', out of his deep concern that the media in the Balkans, divided on ethnic and linguistic lines, had whipped up ethnic hatreds and 'initiated processes that led to unbelievable bloodshed'. He hoped that the Sarajevo conference would mark a new chapter in objective, non-partisan reporting, in the Balkans and elsewhere.

Journalists from 20 countries, including other conflict areas--from Northern Ireland to Nigeria and the north-east of India--took part. Bosnian journalists could relate to editor Vichali Chasie from the hill state of Nagaland, campaigning for independence from India, when he said he had to be measured in what he wrote, otherwise a bullet might be fired through his window the next day. William Stainsby, President of the Newman Institute Ireland, said that, growing up in Northern Ireland, he had 'experienced the insanity of hate and violence'. He believed that 'Sarajevo is called to be a witness to hope, despite all her unresolved tensions. By looking to the future, by rekindling your cosmopolitan history, the media here can help to illuminate the mosaic of Sarajevo as a crossroads of interdependent coexistence.'

Jaraslava Moserova, President of the General Conference of UNESCO, said that people's quality of life was, to a great degree, determined by the media through 'the formation of attitudes and public opinion'. While the media had such power 'there should also be great responsibility', she said. Archie Mackenzie, a former British diplomat in Tito's Yugoslavia, suggested that there was a need to 'build times of reflection into the pattern of our daily lives', in order to 'compensate for the merciless speed and stress in the modern media'. 'Refreshment may come out of a bottle. Perspective comes from silence,' he said.

The conference, promoting the media as 'a decisive force in building a free and just society', was hosted jointly by the International Communications Forum (ICF) and Bosnia's Independent Union of Professional Journalists (IUPJ). Seven major journalists' bodies, including the USA's Society of Professional Journalists, were also associated with the event. It was, according to Mehmed Husic, President of the IUPJ, 'the most important journalists' conference in Bosnia-Herzegovina in the last ten years'.

Topics ranged from information technology to the responsibility of the media in multi-ethnic democracies. But the main outcome was the 'Sarajevo Commitment', a document outlining ethical and non-partisan practice in the media for the new century. Signatories pledge to 'confront hypocrisy, oppression, exploitation and evil', and to 'combine freedom with responsibility, talent with humility, privilege with service, comfort with sacrifice and concern with courage. We realize that change in society begins with change in ourselves.' The statement commits journalists to 'apply and demonstrate in our own lives the values that we hope for and often demand in others... May the higher aspirations within us all, be they spiritual, moral or humanistic, enable us to fulfil this commitment'.

The following day, the Vicar General of Sarajevo, Msgr Mato Zovkic, read an extract from the Commitment in his sermon in the Catholic Cathedral. Husic said he would circulate the Commitment to the IUPJ membership and to newspapers throughout Bosnia. Kamenica said he would keep it 'close to my heart, always in my pocket and in my head. Everywhere I go I will ask my colleagues to sign it.' He hoped the Commitment would have a 'great influence' on the future of journalism and would create a domino process. 'This Commitment will be a living thing. People will talk about it, and hopefully every journalist will sign it.'

British publisher William Porter, whose late wife was Yugoslav, had founded the ICF ten years ago as an independent think-tank of media professionals. He described it as a 'conscience to conscience activity', the Sarajevo Commitment being its first major public call. He believed that Sarajevo, 'a symbol of the world's shame in the 20th century', could be a 'beacon of hope' for the new century. Visionary perhaps. But Sarajevo's citizens--Orthodox Serbs, Catholic Croats, Bosnian Muslims and a large Jewish community--have lived peaceably together for centuries.

Sarajevo gets its name from the Turkish word kervansaray, an encampment or inn for a caravan of traders. Ottoman traders arrived here with their camels in the 15th century and today over 60 per cent of the city's 380,000 population is Muslim. There are 105 mosques and from one particular spot it is possible to see the main religious buildings of all the city's faith communities. Some 35,000 Serbs still live in the city and, throughout the war, families looked after each other across the religious and ethnic divides. One can also see the place, on the corner of Green Beret Street, where a young Serb nationalist assassinated Archduke Ferdinand, heir to the Austro-Hungarian empire, igniting the First World War.

Given greater security and peace, Sarajevo would make a great tourist centre. This is a long way off though. Battalions of SFOR (Stabilization Forces) soldiers still patrol the streets. And throughout the country there are an estimated one million unexploded landmines. Seventy thousand Bosnians still live in exile and Bosnia's Deputy Foreign Minister, Husein Zivalj, says that one of his priorities is to get them back to help in the reconstruction of their homeland. But there is little incentive for them to return. The economy is in dire straits. Nearly 40 per cent of the workforce is unemployed and, as an Oslobodjenje journalist put it, the other 60 per cent work only half the time.

Nonetheless things are changing slowly. Electricity and water supplies have been restored, and sparkling new shops and restaurants have opened. Living at a crossroads between east and west, Sarajevans would heartily agree with Porter's aspiration for Sarajevo to be a 'beacon of hope'.

Copies of the Sarajevo Commitment are available from the ICF. www.icforum.org

First published in For A Change magazine, 12 January 2000.