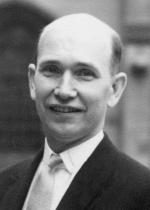 Melville Carson was a 22-year-old Pilot Officer during World War II when he was shot down during a bombing raid over Germany. The only survivor of the four-man Handley Page bomber crew, he spent three years in Stalag Luft III prison camp, immortalized in the film The Great Escape. He played the violin in the camp’s dance band and became the leader of the camp orchestra, whilst tunnel diggers hid earth underneath the raked seats.

The German guards foiled the escape, on the night of 24 March 1944, when they discovered tunnel “Harry”—so named by the prisoners—and sounded the alarm. Of the 76 who escaped, only three got away to freedom. The rest were recaptured and 50 of Carson’s friends were subsequently shot by the Gestapo on the orders of Hitler. Carson was lucky to survive. He was No 151 on the escape list but the guards had found the tunnel before his number came up.

He remained a prisoner in Stalag Luft III till the end of the war. He attended Gaelic lessons in the camp—the language used to safely discuss news received on a secret radio.

Marking the 60th anniversary of the escape, in March 2004, the broadcaster Sally Magnusson interviewed Carson for the BBC’s Songs of Praise programme inside the National Museum of Flight in East Lothian.

Magnusson introduced Carson as “the man who never forgot the Great Escape”. She asked him how he coped with the death of so many of his friends. “You realize bitterness is a destroyer and you have to deal with it,” he replied.

“How did you solve that dilemma?” Magnusson asked him.

“I realized that if I didn't forgive and had this bitterness in my heart then I am actually sowing the seeds for the next conflict... In my case, I find I daily need to ask for the gift of a new nature, a nature motivated by the love of God and free from the burden of having to prove something about myself; a new nature of son and heir [of God], not a hired servant who is on and off duty part of the time; and a new nature that rejects the victim role and keeps the perspective of miracles.”

After the war, Carson completed his chartered accountancy training in Edinburgh. He planned to emigrate to Canada. But on a trip to the USA in 1947 he visited a centre for the Moral Re-Armament movement, then at Mackinac Island in Lake Michigan. There he met other war veterans. His honesty with a Canadian friend, about his deep sense of guilt over the death of his bomber crew, set him free from the painful memories. “I had a great sense of becoming a forgiven sinner,” he told a journalist, years later. “A feeling like an electric shock, that went down my spine, left me with the thought, ‘Behold, I make all things new’.”

Carson devoted his life to MRA’s work of post-war reconciliation and forgiveness. As well as visiting Germany, he spent three years in India and Burma. He worked for the rest of his life as an accountant and musician with MRA in London and then for nine years in Washington DC from 1983.

Melville Forbes Carson was born in Edinburgh in 1919, the son of a businessman who worked in Thailand. At the outbreak of war he immediately volunteered, aged 19, for the RAF, quoting “When duty is severe let there be no coward shrinking”. He flew 20 sorties over Germany before being shot down.

After the war he met Elizabeth Law, through their common involvement with MRA, and they were married in Edinburgh in June 1967.

They returned from the US to Scotland in 1992, settling in Haddington. On 8 May that year he and Elizabeth had visited the Kiel war cemetery in Germany where his crew members lie buried. It was the 50th anniversary of their death.

He died in Edinburgh Royal Infirmary on 11 July, having suffered a stroke. Air Commodore Charles Clarke, OBE, President of the Royal Air Forces Ex-Prisoners of War Association, had lived in the same hut as Carson in Stalag Luft III. He remembers Carson as “a very kindly, mild and dedicated gentle man”.

The conductor of the prison orchestra, Professor Art Chrighton, whose life Carson had savide during a forced winter march in temperatures of -35C, wrote to Elizabeth recently: "Melville was spared in the crash of his aircraft to enrich, to ennoble and to touch all by the grace of the Holy Spirit that lived in him."

In many ways he fulfilled the motto of the Forbes clan: “Grace me guide”.