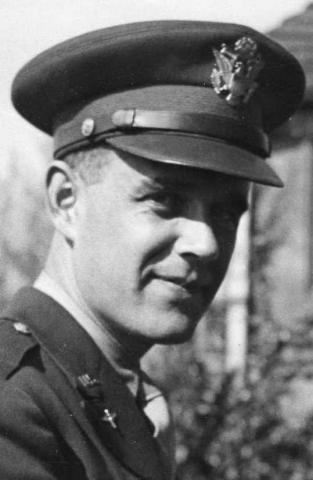 Michael Barrett was a principal pioneer of the Moral Re-Armament movement as secretary to Frank Buchman, its American founder. He was with Buchman in the Black Forest near Freudenstadt in 1938 when Buchman, ruminating about impending war, first dictated his thought that ‘the next great movement in the world will be for moral and spiritual re-armament for all nations’.

Barrett accompanied Buchman to America in 1939 to launch MRA there. The aim was to engage in a morale-building programme in American factories. When MRA was incorporated in the United States, Barrett wrote the preamble to its constitution: ‘Riches, reputation or rest may have been for none of us the motives of association…. Our security has been the riches of God in Christ Jesus,’ it read in part.

During the Second World War, Barrett served as a captain in the 8th US Air Force which flew the spearhead planes during the D-Day landings. With 250,000 USAF personnel based in Britain, Barrett did much to build co-operation between the USAF and RAF commands, proposing an exchange of bombing skills and techniques. He was appointed head of Information and Education for the 8th Air Force, responsible for setting up 60 job-training schools for its personnel.

At war’s end, a telegram from General Marshall, US Chief of Staff, ordered Barrett’s immediate release from service, to be ‘assigned to the work of Moral Re-Armament’.

The son of an Edinburgh businessman, Barrett had encountered Buchman’s Oxford Group, the forerunner of MRA, at Oxford University, where he gained his MA in Politics, Philosophy and Economics in 1933. He learnt shorthand and typing to assist Buchman, who said that Barrett ‘had the mind of a statesman and he loved to serve’.

He married Margaret Carey-Evans, a granddaughter of David Lloyd George, and together they took part in MRA’s work for reconciliation in India, South-East Asia, South Africa and Rhodesia/Zimbabwe.

Tall and dignified, Michael Barrett retained a strong faith and dry sense of humour. He was at home with kings and presidents but never lost the common touch.

First published in The Independent, 1 December 1995