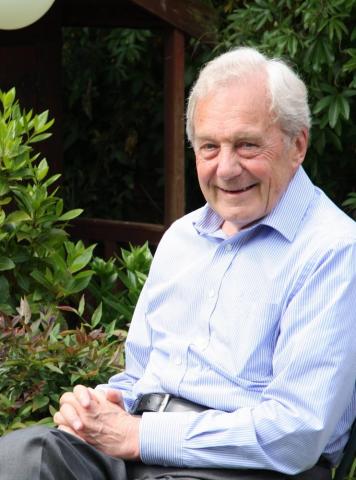 My friend Michael Henderson, who has died aged 90, was a Christian journalist and broadcaster, and the author of books on forgiveness in personal and public life.

Michael was born in Ealing, west London, elder son of Douglas Henderson, a businessman, and his wife, Erina.

In 1940, he and his younger brother, Gerald, were evacuated to live with a family in Boston, MA, during the second world war. As they left London, Michael called out to his mother: “See you after the duration.” He later wrote a book of this title, telling the stories of what happened to children evacuated to North America during the war.

When the boys returned to Britain in 1945, it was hard for them to settle back into family life after five years away at such a formative time. To re-establish family unity, they visited the Caux centre near Montreux, Switzerland, run by the Moral Re-Armament movement, an interfaith organisation. The centre had opened the previous year as a base for postwar reconciliation and trust-building.

After leaving Mill Hill school, Michael volunteered at the Caux centre and continued to work for MRA internationally for the rest of his life.

He and I met in the late 1960s, after I had left school, when we worked together on a newsletter called New World News, in London, published by MRA, of which he was the editor.

In the early 1970s he was a correspondent for Himmat newsweekly in Bombay (now Mumbai), India, and wrote the first of his 14 books here, From India With Hope (1972). Another book on India, Experiment with Untruth (1977), was an exposé of the emergency period of dictatorship imposed by the prime minister Indira Gandhi.

Michael married Erica Hallowes in 1966. They went to the US in 1979 and lived for more than 20 years in Portland, Oregon, where Michael was a moderator on Oregon Public Broadcasting and made radio programmes. His radio talks were published in three books, A Different Accent (1985), On History’s Coattails (1988), and Hope for a Change (1991). Michael’s 2009 book on reconciliation, No Enemy to Conquer, included commentaries from Archbishop Desmond Tutu, Benazir Bhutto and Lord Sacks, the former chief rabbi. The foreword is by the Dalai Lama.

Michael and Erica retired to Westward Ho!, Devon, in 2000 and moved to Taunton, Somerset, in 2018. He remained a keen tennis player, competing in national doubles tournaments for those aged over 80. He also enjoyed walks on the South West Coast Path.

He is survived by Erica, their daughter, Juliet, and two granddaughters, Lola and Lucy.

First published on the website of The Guardian, 19 May 2022