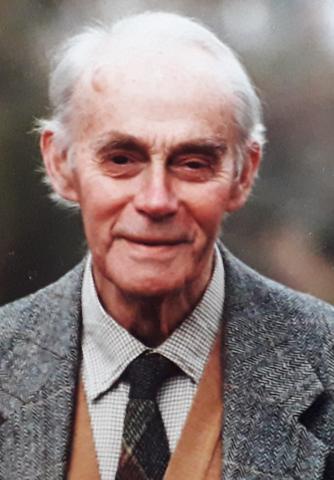 The poet Michael Thwaites is the only Australian to have won Oxford's annual Newdigate Prize for poetry. At the time, 1938, he was a Rhodes Scholar at the university. In 1940, during the Second World War, he became the first Australian to win the King's Medal for poetry, in succession to W.H. Auden.

His war experience in the Navy produced his most famous poem, "The Jervis Bay" (1942), an epic ballad of heroic self-sacrifice. It tells the true story of the ship's defence of a convoy crossing the Atlantic which came under attack from the German pocket battleship Admiral Scheer. HMS Jervis Bay's action, in confronting the Admiral Scheer, before going down herself, saved 32 of the 37 ships in the convoy. The poem, published in London and New York, received critical acclaim on both sides of the Atlantic. Thwaites's other war poems are often anthologised.

Thwaites was also the most unlikely of spymasters, serving for 20 years in the Australian Security Intelligence Organisation (Asio). Colonel Charles Spry, the then Director-General of Asio, approached Thwaites in 1950 to join the service. When Thwaites protested his inexperience, Spry replied: "You're a poet aren't you? You have imagination. We want imagination in the organisation and people with analytical skills."

A Soviet spy ring was operating in Australia and the Prime Minister, Robert Menzies, had asked Spry to boost Asio's operations. Sir Edmund Herring, Lieutenant-Governor and Chief Justice of the state of Victoria, had recommended Thwaites to Spry.

Leaving an academic career at Melbourne University, Thwaites became head of Counter-Espionage, and remained in Asio till 1971. His concern was that, while the war had conquered the threat of Fascism, the world still needed to defend itself from the perceived Soviet ideological threat. "The Cold War was not an illusion. It had to be won," he said.

Thwaites became publicly known for debriefing the Soviet spies Vladimir and Evdokia Petrov, who defected from the Soviet embassy in Canberra in 1954. Thwaites spent 18 months with them in a safe house in Palm Beach, a Sydney suburb, getting to know them well and ghost-writing their book The Empire of Fear (1956). Much later Thwaites published his own account in Truth will Out: ASIO and the Petrovs (1980). Petrov, who was the head of Soviet intelligence in Australia, turned out to be a goldmine - "an agent of value" - revealing the names of some 600 KGB officers operating as diplomats around the world. He was also the first to confirm that the British traitors Guy Burgess and Donald Maclean were living in Moscow.

Michael Thwaites was born in Brisbane in 1915, the son of a Yorkshireman who had immigrated to Australia to become a teacher at Brisbane Grammar School. Michael's father instilled in him a love of poetry. The family moved to Victoria, where Thwaites won a scholarship to Geelong Grammar School. There the Classics master encouraged his poetry and the school magazine published his "Australia to her Children". The daughter of the school's doctor, Honor Good, found the poem "riveting" and when they both went up to Melbourne University in 1934 they became devoted to each other. They were married in Oxford in 1939. Their four children include the London-based concert pianist Penelope Thwaites, a leading authority on the music of Percy Grainger.

Thwaites won the King's Medal for Poetry for his Newdigate Prize poem Milton Blind, while his patriotic wartime poem "The Prophetic Hour" was published in The Times in July 1940. During the war he saw action during the Battle of the Atlantic, commanding a corvette and rising to the rank of lieutenant-commander. He wrote a dramatic war memoir, Atlantic Odyssey (1999).

After the war he returned to Oxford, taking a BLitt, and in 1946 he and Honor attended the opening of the Moral Re-Armament (MRA) centre for post-war reconcilation in Caux, Switzerland, which was to host large groups of Germans, French, British and Japanese, as well as Anzac war veterans, in the following years. From that point onwards the ideas of MRA (now renamed Initiatives of Change) were a continuing influence on his life.

On his return to Australia, Thwaites accepted a three-year lecturing post in the English department of Melbourne University before joining Asio in 1950. On Charles Spry's retirement, he was disappointed to be passed over for promotion. He left the service to become assistant parliamentary librarian in Canberra, which allowed him more time for his poetry.

Michael Thwaites's books include Poems of War and Peace (1968), The Honey Man (1989) and Unfinished Journey: collected poems (2004), which spans 72 years from 1932 to 2004. His patriotic hymn "For Australia", co-written with his wife to a melody by Henry Purcell, was sung when the Queen opened Australia's new Parliament House in 1988:

People of the ancient Dreamtime,
they who found this country first,
ask with those, the later comers,
Will our dream be blessed or cursed?
Grant us, Lord, new birth, new living,
hope for which our children thirst.

Thwaites's "Message to My Grandson" is included on the 25th-anniversary CD of BBC radio's Poetry Please as one of its most requested poems.

First published in The Independent, 15 November 2005