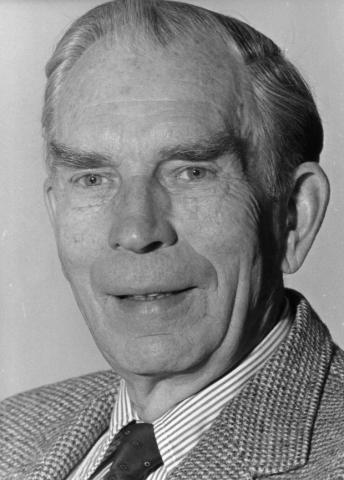 Paul Campbell was personal doctor to Frank Buchman, founder of the Oxford Group and its campaigns for Moral Re-Armament, for 19 years, and, with the British journalist Peter Howard, did much to shape the direction of the movement after Buchman’s death in 1961.

He was at Buchman’s side throughout the period of reconstruction after the Second World War. He helped in the rapprochement between the French and the first Germans to visit MRA’s centre in Switzerland in 1946 and, also there, welcomed the first Japanese to visit the West after the war. This led to what became known as Japan’s ‘statesmanship of the humble heart’, through apologies made by the Japanese Prime Minister, Nobusuke Kishi, in 1957.

Campbell travelled widely with Buchman through Asia and Australasia, and accompanied him, in 1954, to Morocco. At MRA’s Swiss centre at Caux, Campbell played an unexpected part in developments towards the independence of Morocco from France.

Chairing a meeting, he spoke warmly of the hospitality given them by El Glaoui, the Pasha of Marrakesh and an ally of the French. In the audience was a young militant nationalist, Ahmed Guessous. Furious, Guessous threatened to leave. Over lunch, Campbell said to Guessous, ‘I know in my life I am no closer to God than to the person from whom I feel most divided.’

His remark struck Guessous deeply. He returned to Morocca and was reconciled with the Pasha El Glaoui. El Glaoui, in turn, unexpectedly called for the Sultan, in exile in France, to be restored to his throne. This became known in the world’s press as ‘The Pasha’s Bombshell’, and within days Morocco was on the path to independence.

Paul Campbell was born in 1912, the son of a Scottish pastor who had emigrated to Alberta. He was set for a brilliant medical career at the Henry Ford Hospital in Detroit when, aged 30, her resigned his post to join Buchman. In 1957, he marred Annejet Philips, daughter of Frederik Philips, President of Philips Electronics, of Eindhoven. They lived in Dulwich, south London, and frequently visited his native Canada.

Campbell wrote four books including, with Peter Howard, a study of St Paul entitled A Story of Effective Statesmanship (1956). He could be robust in his diagnosis of a person’s spiritual needs but this was tempered by a deep compassion. In his last book, A Dose of My Own Medicine (1992), he wrote: ‘To me the most satisfying thing in life is to see the spirit of God at work in the life of another person, and to see that person develop into a potential leader for his or her nation.’