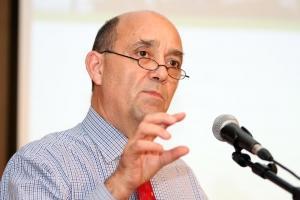 In the years leading up to the economic crisis of 2007-08 few challenges were made to excessive and opportunistic financial activity and since then few individuals have been called to account for the damage it caused. Paul Moore, who has died aged 61 of colitis, set in train a rare whistleblowing reproach to bankers whose laxness led to incalculable harm and misery.

As head of group regulatory risk at HBOS, which came into being with the merger of Halifax and the Bank of Scotland in 2001, Moore had oversight responsibility for the bank’s compliance with the Financial Services Authority regulations.

In 2004 he warned the board that their aggressive sales culture had become markedly out of kilter with its risk management.

They were expanding too fast in unsustainable lending and in the sale of financial products such as Payment Protection Insurance. The issue had been particularly focused for him when an employee in their Scunthorpe branch told him: “Paul, we’ll never reach our sales targets and sell ethically.”

In characteristically blunt terms, he told the board to slow down. It was not a message, either in the content or style of delivery, that the chief executive, James Crosby, wanted to hear. A lawyer by training, Moore was used to reaching conclusions based on evidence. This could be disconcerting to those who expected someone more willing to bend to the corporate will. Inevitably this would cause conflict, especially if the organisation valued loyalty before honesty.

A few weeks after Moore’s warning, Crosby called him into his office. Moore assumed that Crosby wanted his advice on how to address the bank’s risk culture. Instead, to Moore’s shock, Crosby dismissed him. He replaced Moore with a sales manager who had no previous experience of risk management.

When Moore phoned his wife, Maureen, from the street outside to tell her he had been given the sack, she told him him not to worry, as “this is all part of God’s plan”.

They were devout Roman Catholics: Moore met Maureen Oats, who had Anglo-Colombian parentage, in 1988 when they were hang-gliding in the Andes. They married in Chile the following year and eventually settled in the North Yorkshire village of Helmsley.

Moore sued HBOS for wrongful dismissal and received a settlement of more than £500,000. Part of the settlement was a gagging order forbidding him from talking publicly about his dismissal. However, he realised he would be protected by parliamentary privilege in giving testimony to a Treasury select committee investigating the banking industry.

In 2009, after the global financial crash, Moore sent the committee 5,000 words of evidence before appearing in person. A Treasury official said that Moore’s evidence was “explosive”: his exposé became headline news with double page spreads in Sunday newspapers.

Anticipating the public reaction, Crosby, who had been knighted in 2006, resigned as deputy chair of the Financial Services Authority, ostensibly to protect the FSA’s reputation. It had failed to rein in HBOS. The prime minister, Gordon Brown, had to rescue HBOS from collapse by injecting £21bn of taxpayers’ money. He also backed the takeover of HBOS by the Lloyds Banking Group. Crosby later surrendered his knighthood in the light of the HBOS scandal.

Moore was further vindicated when in 2012 the Parliamentary Commission on Banking Standards castigated HBOS’s former leadership, prompting an apology from Crosby to the commission. He was one of only a handful of bankers ever to say sorry.

In 2013 Moore told the Financial Times: “It’s like the parting of the Red Sea. I feel a massive shift has taken place. I think most people knew I was right and had a lot of admiration for me but could not associate with me because of risk to themselves. Now they see I spoke up from conscience and competence, not hatred.”

His stance contributed towards a public culture that deplored greed and welcomed reform. Excessive bonuses were curbed, as was lending in the sub-prime mortgage market. Under the so-called international Basel rules, banks had to set aside far greater reserves to cover bad debts on unrecoverable loans.

Moore told an international business forum in Caux, Switzerland, in 2011, that the banking crisis was symptomatic of a much deeper malaise: a pervasive culture of “me, more, now”, in which GDP and continuous economic growth were the only mantras. In consequence there was a need to “rebuild our public policy around the financial sector in a way that not only serves the real economy but also the common good of humanity”.

This was also a theme of his self-published memoir, Crash, Bank, Wallop (2015), co-authored with Mike Haworth. In it he called for a New Wilberforce Alliance to promote a culture of integrity, echoing William Wilberforce’s emphasis on the need for “manners” or morals in English public life.

Born in Bristol, Paul was the second of four children. His father, Bernard, was a ceramics engineer and his mother, Jean (nee Russell), had worked for the blood transfusion service. His great-grandfather was the ceramic chemist and art potter Bernard Moore. From Ampleforth college, North Yorkshire, Paul went to Bristol University to take a law degree.

He was called to the bar, practising briefly and specialising in tax law, but switched to financial services initially because working for Allied Dunbar in Swindon, Wiltshire, took him closer to the hang-gliding hotspots of the Marlborough Downs and South Wales. At the accountancy firm KPMG (1995-2002) he was an adviser on financial regulatory issues to a number of FTSE 100 clients, before moving on to HBOS.

Moore paid a heavy price for his whistleblowing. Headhunters ignored him and it was only in December 2012 that he became, for a while, the non-executive chair of Assetz Capital, a peer-to-peer lender. He never worked in banking again and had to cope with bouts of manic depression.

In recent years, he developed a passion for cycling, rounding up friends to tour the moors of Yorkshire.

He is survived by Maureen and their three children, Emily, Daniel and Oliver.

First published on the website of The Guardian, 11 November 2020 and in its print edition on 27 November.