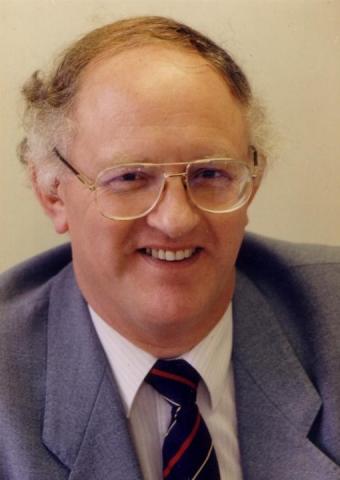 Peter Harland was at the heart of one of the most serious disputes in British newspaper history. An accomplished regional newspaper editor, he was appointed Managing Editor (New Technology) of Times Newspapers (TNL) in 1978, in charge of setting up new computer typesetting technology at The Times and The Sunday Times. It was a role he relished. But he found himself caught between the print trade unions, which resisted any move from old "hot metal" linotype machines, and TNL's determination to beat the unions' stranglehold. The dispute led to an 11-month lockout of the workforce during 1979, while the TNL board, under its chief executive Marmaduke Hussey, suspended publication. It was the longest closure of the two flagship papers, then owned by Lord Thomson of Fleet.

Harland was determined to keep the lines of communication open, particularly with the National Graphical Association, the compositors' union, at a time when all official negotiations were at a standstill. He held off-the-record breakfast meetings, facilitated by the Moral Re-Armament movement, with the so-called Fathers of Chapel, or shop stewards, from both papers. Messages were taken by taxi from London to the NGA's Bedford headquarters. Harland knew that he was going out on a limb. But he was also motivated by his personal faith - he was the son of the Archdeacon of Rochester, who was to become a Queen's chaplain - arguing that, if this meant anything to him at all, then he had to take responsible action for the situation.

The papers eventually reopened without the new technology. But it was a Pyrrhic victory for the unions. Two years later, by when Harland had departed, Thomson sold the papers to Rupert Murdoch, who circumvented the print unions by surreptitiously transferring production in 1986 from the papers' Grays Inn Road site to new headquarters in Wapping. There Murdoch employed electricians rather than printers to run the presses. It was a coup that transformed the fortunes of the newspaper industry and brought about the demise of Fleet Street and its old employment practices.

For Harland, Fleet Street was a disillusioning experience, after a lifetime's distinguished career as a regional newspaper journalist and editor. A brass-tacks Yorkshireman, of cheerful wit and good-humour, he was born in Shipley in 1934. He read History at Sydney Sussex College, Cambridge, and in his final year there edited the student paper Varsity. His contemporaries and fellow Varsity contributors included Michael Frayn, Sylvia Plath, Ted Hughes and Michael Winner. At Cambridge he joined the Magic Circle but, after marriage, let his subscription lapse.

Before university, he had already worked as a reporter on the Chatham News in Kent where, after Cambridge, he became Deputy Editor till 1958. He moved to the Northern Echo in Darlington as a sub-editor and, in 1960, worked for several months for The Daily Telegraph's northern edition in Manchester. He was briefly The Observer's northern football correspondent, 1960-61.

In 1961 he joined the Oxford Mail and while there he married Jennifer Sutcliffe, a childhood sweetheart from Yorkshire. They entered married life on the secure income of £21 a week. In 1965, he realised his ambition of becoming an editor, aged 31, at The Yorkshire Evening Press in York. There, the Army sponsored him on the 40-mile Lyke Wake Walk to raise funds for York Minster. But he was promptly sacked by Charles Fenby, editorial director of the Westminster Press which owned the newspaper, after he wrote an editorial, headlined "Yah, Boo, Sucks", critical of the Director of the York Festival.

Harland thought his career was in ruins. But a week later Fenby offered him the editorship of the Bradford Telegraph & Argus, which needed turning around. The post of Editor-in-Chief, which he held from 1967 to 1973, gave Harland the chance to establish his reputation as a campaigning editor. He continued the previous editor's tradition of giving a voice to the city's Muslim population, including a column in Urdu, in order to help build community relations. And he co-authored, with Harold Evans, Clement Jones and Hugo Young, Race and the Press (1971).

But it was his publication of exposés that drew national media attention. One concerned a case of mistaken identity by the police; another was over the Sokol murder case, when the murderer, who pleaded guilty, was sentenced to life imprisonment solely on the basis of lawyers' dispositions, without any evidence being heard in court. Harland even exposed the paper's own biggest advertiser, a local estate agent, for failing to pay its bills.

"When Peter came it was a complete breath of fresh air. He was just very adventurous," remembers Ray Fitzwalter, then a young reporter on the Bradford paper and later renowned as the editor and executive producer of Granada TV's World in Action. When Fitzwalter sniffed out local government corruption Harland backed him. The story became a cause célèbre in the national media. John Poulson, a Pontefract architect, was found guilty of paying bribes to local councillors in order to win contracts, and was jailed for five years in 1974. Fitzwalter was named Young Journalist of the Year in the 1969 IPC awards. Harland himself was named Campaigning Journalist of the Year in the 1968 National Press Awards.

Harold Evans, the campaigning editor of The Sunday Times, urged Harland to join him on the paper as his assistant in 1973. Harland reported Harold Wilson, and then Edward Heath, on their general election campaigns. Following the 11-month closure, he took early retirement in 1981 amd spent a sabbatical setting up a new English-language daily, The Island, in Colombo, Sri Lanka, its sister Sunday Island, and a Sinhalese edition, Divaina, at the owner's invitation.

He returned to found Bookwatch, based in Amersham, a company that tracked book sales for newspapers' weekly best-sellers lists. He devoured books himself and was managing director from 1982 till the company's sale in 2003.

Harold Evans had originally asked Harland to produce a best-sellers list in 1974. The Sunday Times list was the first in the British press, and Harland enlisted an ex-Oxford Mail colleague, Jon Hartridge, to collate the data. When Harland left The Sunday Times, Bookwatch took over gathering the information. Sales figures came eventually from some 650 booksellers and book chains. Bookwatch pioneered the best-sellers lists for most daily and Sunday national papers as well as the book-trade weekly The Bookseller. Bookwatch also published the weekly Books in the Media - affectionately known as BIM - as well as supplying sales figures to individual authors.

The lists were based on booksellers' weekly sales, rather than publishers' annual sales or shipped-out figures. Harland worked at first under "extreme hostility from publishers", says Steve Butler, who was Bookwatch's senior analyst:

They were dead against releasing actual figures. He did a very difficult job. Peter got little thanks for almost single-handedly introducing the best-sellers list into the UK. Yet these, in combination with BIM, contributed enormously to sales.

Some chagrined authors and publishers, however, claimed that the best-sellers lists were fixed. Jennifer Harland, who ran the business with Peter, said:

We knew the only way to run the lists was with total integrity. One of our employees used to say, "How could the lists possibly be a fix? Peter's a churchwarden, for heaven's sake!"

This article first appeared in The Independent on 15 July 2005.