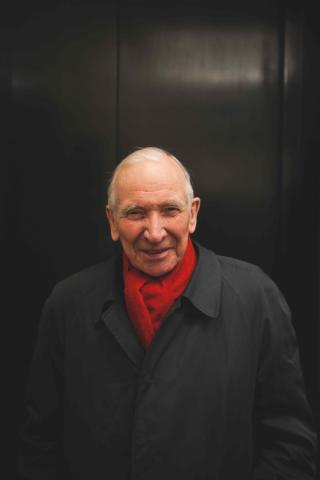 Stanley Kiaer might have pursued a promising career in the City of London, where he worked in shipping and with Roche pharmaceutical company after his graduation from Cambridge. Instead he resigned to follow his calling into non-profit work, not only with the Oxford Group, the Christian charity which campaigned for ‘moral and spiritual rearmament’, but also, for 13 years, as the Director of the Institute of Business Ethics.

He was the Secretary of the trusts which owned and ran the Westminster Theatre, renowned for its contemporary Christian plays, from 1964 till it ceased productions in 1990. The theatre had been purchased by the Westminster Memorial Trust, on behalf of Moral Re-Armament (MRA), in 1946 in memory of the men and women associated with the movement who had given their lives during World War Two. An able administrator, Kiaer was also the Secretary of Westminster Productions, the company that staged the plays. He became the Secretary of the Oxford Group, which now campaigns as Initiatives of Change, from 1994 till 2001 when he turned 70.

Kiaer became the Director of the Institute of Business Ethics from the year of its inception in 1986 till 1999. He took over the role at short notice following the sudden death of its founding director, Hugh Kay.

He proved to be an ideal choice. A true gentleman of great courtesy, and with a twinkle in his eye, he was a man of impeccable personal integrity. When it came to avoiding police bribery and corruption he would quote, on the issue of reciprocity, ‘You can give a copper a cuppa, but you can’t give him supper.’

He sometimes surmised that he might have had a more influential, and indeed lucrative, career if he had stayed in the City, instead of devoting himself to non-profit charity work.

He need not have worried. While the impact of the plays at the Westminster was not easy to gauge, the role of the IBE, ‘founded by business people for business people’, was more specific. Kiaer oversaw the growing influence of the IBE, launched following the Big Bang deregulation in the City. It issued reports that remain prescient, including: Takeovers—what ethical considerations should apply?; Management and the Health of Employees; Ethics, Environment and the Company; and The Ethical Aspects of IT. He would also preside over IBE events, with titles such as ‘Why invest in tobacco?’ and ‘Personal debt: is it too much encouraged?’ He became IBE’s main media spokesman.

The IBE grew out of the Christian Association of Business Executives (CABE), founded in 1938, which promoted Christian moral principles in the conduct of business. Kiaer was the director of both organizations. The IBE originally operated as a fund within CABE but became a separate charity in 2000, aiming to embrace the ethics of other faiths as well as secular society.

Stanley Kiaer was born in Watford on 7 April 1931, the youngest of four siblings to Danish parents. His father was a banker who died of a heart attack two days after Stanley was born. His two brothers served with the Commandos and the Parachutists during the Second World War and were killed in action. Their elder sister, Lillian, died in 2001 aged 80. Their resourceful mother sent Stanley to Haileybury College. Following two years of National Service in the army, he studied Classics at Cambridge University and became a keen rower for his college, Corpus Christi.

Kiaer’s Christian faith was strengthened by his encounter with MRA while at Cambridge. Encouraged by his mother, he went, sceptically, to its centre in Caux, Switzerland. There a young American encouraged him to pray and to make a daily practice of listening to the ‘still, small voice’ within. This transformed Kiaer’s motivations and sustained him throughout his life.

He married Ann Laidlaw, a nursery nurse, accomplished cook and fellow MRA worker, in 1966. She died of cancer in 1989 and they are survived by their two children, Jennifer and Ian, and three grandchildren, William, Sarah and Jessie.

Following the sale of the Westminster Theatre on cost grounds in 1998, which Kiaer had at first opposed, the Oxford Group moved to offices near Pimlico in 2000. The new building was blessed by the then Bishop of London, Richard Chartres. Kiaer lived in a top-floor flat, becoming a father figure and spiritual mentor to all who worked there. He was surprised when young professionals asked him to share his faith with them. From then on, he held Bible studies once a week for anyone who wished to take part. He died in London, aged 86, on 22 November 2017.