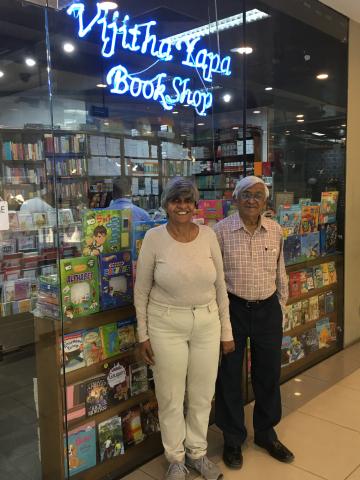 It was only three days before the tsunami struck that Vijitha Yapa decided to give a day off to his staff of eight at his bookshop in Galle, southern Sri Lanka, though for the last 10 years they had worked on Boxing Day.

His decision saved their lives. The bookshop, 50 metres from the beach, was flooded to the ceiling before the water burst through the front door carrying the books onto the street. Yapa had about US$200,000 worth of stock. 'The schools were due to restart in January, the tourist hotels in the south were full and that is why we had so much stock.'

Only a few doors away, three of his cousins were killed in their restaurant which was reduced to rubble. Their bodies were never found. His 84-year-old uncle was also killed. He lived half a mile inland and died from the fright of seeing the waves bringing a 40-foot boat smashing in through the boundary wall of his house. His daughter held onto his hand but could not save him. It was the next day before the undertakers could reach the house.

What shocked Yapa as much as anything was to hear that a man was found still alive, buried under the rubble just outside his shop, a week after the disaster.

The insurance companies 'suddenly became very religious', says Yapa, initially refusing to cover losses because the tsunami was an 'act of God'. He told the company he had insured with, 'You can quote religion but don't forget that God also gave you a conscience.' They finally gave him 10 per cent of the stock value.

Meanwhile Yapa, who owns Sri Lanka's largest chain of bookshops and employs 150 people, faces a trading loss for the year. Without waiting for the insurance, within a month of the tsunami Yapa reopened his shop-the first on Galle's rubble-filled Main Street. Instead of a door, there were planks. Instead of racks there were makeshift tables. Yapa had been moved by the sight of children hanging out their soaked textbooks in the sun and was determined to have at least the school supplies available for them. 'We didn't want to deprive the children of what they needed: exercise books, pens, stationery and text books. One of our first customers was an Italian who wanted to give 80,000 rupees worth of books to the local schools.'

Yapa tells about the principal of one school in Galle who had called a meeting to discuss timetables on the day the disaster struck. One of the teachers present, who was pregnant, saw the wave coming and climbed onto the table. As the wave crashed through the door, the principal and the pregnant woman were holding hands but were pulled apart. The woman held on to a wooden plank from the table, but they never found the body of the principal.

Some children have lost both their parents and stare out at the sea, waiting for them to return, says Yapa. One salesman told him, 'We lived by the sea, our friend. Can we ever trust it now?' Despite his losses, Yapa has initiated a campaign to give free books to school libraries affected by the tsunami. 'What is my loss compared to the suffering of these children?' he asks.

At the end of February, Yapa was elected President of Sri Lanka's Booksellers Association. He is the largest importer of books from Britain, air-freighting in one ton each week. Now he has written to some 100 British publishing houses inviting them to donate books to Sri Lanka's schools, 200 of which were damaged. The Book Sellers Association itself has made an initial donation of Rs100,000 to cover the costs of transport and warehousing. And a British man in Oxford, who was born on a tea plantation in Sri Lanka, has raised GBP700 towards the fund.

First published in For A Change magazine, 6 January 2005