Mike Smith, Head of IofC UK’s Business Programs chaired ‘Sustainable Inclusive Economic Development’, one of four breakout sessions on 6 April at the Healing History conference taking place in Richmond, Virginia. Panellists from Scotland, Mexico, the USA and England showcased and discussed models of best practice in grassroots and national economic development, affecting people's lives - and job opportunities - for the better. The audience discussed how core human motivations in economic activity contribute towards the wellbeing of individuals, communities, wider society, and the common good. Smith posed four questions to the audience: 1) What is your core commitment? 2) What is your core motivation? 3) What sustains you? And 4) What is your greatest challenge? 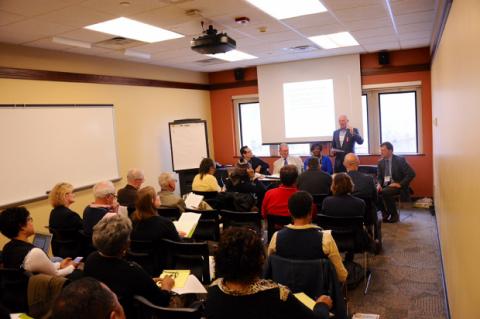 Lawrence Bloom, former Intercontinental Hotel Group Executive Committee member and now Chairman of Be Energy, a bioenergy company, from London spoke about the different dimensions in the business world. 'Investments have started to become three dimensional' he said. 'Ten years ago it was always about risk and reward; the higher the risk, the greater the reward. The word ‘Social Impact’ never existed.' He talked about the movement to include sustainable impact in companies such as climate bonds and the principles of sustainable investment. 45 Trillion USD$ have already signed up for the social category investment. In Peterborough, UK for instance, 17 organizations created a youth offender social initiative for education, healing and providing tools for first-time prisoners, raising £17 million which serves over 3,000 prisoners. Money is returned to investors depending upon a decrease in repeat offenders. Sustainable investments are now starting to flow into the social arena. 'It is a powerful process and there is more and more of a lurking opportunity for businesses within the social world', Bloom explained.

Teresa Hodge from Washington DC, an Advocate, Business Innovation Strategist and Certified Life Coach, specializes in re-entry into the employment market for ex-offenders. In 2006 she herself was wrongly convicted for a white collar crime that she never committed. Yet she served a four and a half year sentence. 'I learned that persons don’t go to prison, families go to prison.' She had to leave her daughter behind. On the tenth day in prison Hodge had a vision: 'I wanted to use my experience of what was happening to me to help myself and help others in a similar situation.' Her idea of restoring people after prison was born. Prison is a big business in the USA; there are 2.3 million people in jail and 700,000 released each year but in Hodge’s opinion most are left to suffer in silence. 'It is important for us to see the narratives of those who go to prison' breaking stigma and stereotypes, she said. 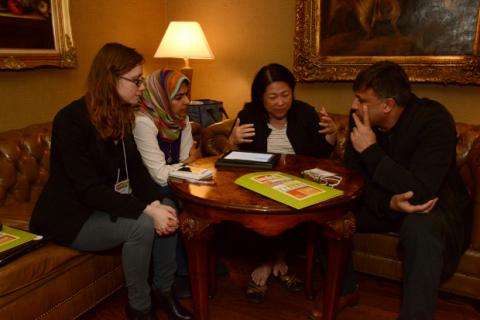 Ian Monteague from Glasgow is the Director of FARE (Family Action in Rogerfield & Easterhouse), a social enterprise based in what was the largest, and often most troubled, post-war housing estate in Europe. Monteague believes that the greatest change comes from personal transformation and a sustained commitment. 'Top down doesn’t work,' he commented, explaining that he turned down a political career. Soon after he was approached by his local community to help. This help grew from one support worker into an organization that now has a national profile. Monteague stated that four aspects have enabled FARE to grow: 1) Desire; right from the start he experienced a deep calling. 'Do you want to make a difference in your community, if so you need desire to change things.' 2) Belief. 'I woke up as a teenager and said I need to do something about my communities situation.' 3) Expectation. 'Do you actually believe change can happen? Expect it can happen because it will' and 4) 'You are the change!'

Jose Carlos Leon Vargas brought in the context of affecting marginalized people's lives in Mexico where he is co-founder of SiKanda, a non-profit organization that works with highly impoverished communities, particularly slum dwellers and informal waste pickers. 'I was blind to this community and the situation of these people.' He said. An important role of SiKanda (meaning ‘something that is changing/evolving’) is to remove the 'layers of blindness' of people in urban areas and raise awareness that these people live in extreme poverty, living on less than $1.50 a day. Privilege was a common topic to emerge at the Healing History conference and Vargas’s journey began with this. He studied at one of the top international research institutes in Mexico City where he was confronted and motivated by ‘disparities’. He gave the example that there were over 1.5 million books in the library for barely 100 students.

Economic development is competitive and Vargas believes that most of the time business lacks a human element. 'It is this current economic system that made these people this way,' he said. He confirmed that inclusiveness begins with listening to each other and sustainable means relationships. 'We need to strip our taboos and prejudices which include race, religion, gender and once we remove these layers we have individuals who can work together' for the common good. Mike Smith asked Vargas what inspires him to do the work he does. He replied, 'It is a calling. One of the great things in my life has been the chance to discover my calling at an early age.' Vargas helps others not as charity, but as his profession.

The discussion with the audience flowed around ex-offenders experiencing PTSD (post traumatic stress disorder) and how connections to organizations and the community are essential in dealing with this. They also discussed 'teaching people how to fish'. Bloom commented, 'It’s not just about teaching someone how to fish, but who owns the lake and the boat!'