Time for businesses to move beyond token CSR

It is time for businesses to go beyond undertaking token Corporate Social Responsibility (CSR) programmes and focus on bigger issues such as how their businesses impact the environment and how they can incorporate measures to address climate change and global warming by taking in the interests of all stakeholders in the economy, journalist and author Michael Smith who writes extensively on topics of value in business and the economy said. 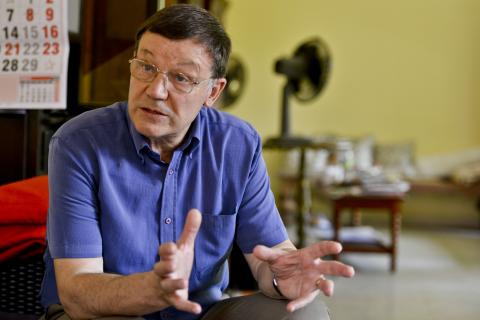 “CSR is okay, but businesses have to go way beyond. CSR can be a little bit of whitewashing. It’s become just another box to tick. At the business roundtable of a group of 200 leading corporate leaders in the United States last year, they agreed to move beyond just focusing on shareholder value to looking at issues like responsibility to your employees, the supply chain, environment and all stakeholders in the economy and particularly in this age of global warming we have to look at the business response to climate change,” Smith who was in Colombo to discuss his latest book ‘Leading with Integrity – Creating Positive Change in Organisations’, said.

Smith said the presence of Greta Thunberg, the Swedish environmental activists at the World Economic Forum in Davis, Switzerland underscored the importance for businesses to ensure they adopt sustainability measures as a matter of priority. “I have great respect for Greta Thunberg. She says we only have 10 years left in which to save the planet from catastrophic climate change. Whether that proves to be true or not is another matter, but nonetheless we must take her seriously. Her message is important which is why she was the focus at the World Economic Forum in Davos last month,” Smith said in an interview with Daily FT.

Smith who is former Head of Business Programs at Initiatives of Change, UK, began writing articles on integrity in businesses to newspapers more than 50 years ago and has been published in all the leading newspapers in the UK. His new book ‘Leading with integrity’ which will be officially launched in Australia later this month includes over 60 stories of best practices in business and economy; true examples of ethical leadership that are sure to inspire others.

“While it’s true there are many causes for concern such as the wide pay gaps in the corporate sector with those at the top apportioning for themselves large chunks of the profits, there are many success stories like the ones that I have written about. They may seem like small changes, but they inspire others and can have a big impact globally. Many of the world’s problems – and their solutions – are rooted in human nature. Fear, hate, greed and indifference lead to injustice, poverty, conflict and environmental destruction. Yet it is also in human nature to be caring, courageous and creative,” he said.

Among the stories in his book are about the changes brought in by hotel chains to reuse towels and toiletries without replacing them every day for guests which adds up to a massive saving on water, electricity, etc. and similar such initiatives. “I am told the airport in New Delhi is putting up solar panels between the runways. These are positive changes.”

In his book, Smith illustrates that human motivation plays a key role in the direction in which organisations and the world goes. “People in leadership are either motivated by greed and acquisition or by contribution to society in the interests of all stakeholders. The choice is between materialistic or ethical and, indeed, spiritual values. The way we do things is as important as what we do.”

Smith also writes on finding time for selfreflection. “How do you strengthen your mind, heart and spirit to want to do the right thing? One way of doing that is to take time
out, to listen to that voice of conscience, that voice of wisdom. I write about making that a practice in your life, in your personal life and professional life.”

The author said that people often refer to ‘Wealth of Nations’ written by Adam Smith who is considered the founding father of modern economics and pay heed to its Laissez-faire philosophies, such as minimising the role of government intervention and taxation in the free markets but overlook that he also wrote a book called ‘The Theory of Moral Sentiments’ in which the 18th century author refers to the ‘Impartial Spectator’, which acts like a ‘demigod within the breast’ – in other words – one’s conscience. “The need is to rediscover Adam Smith’s moral philosophy; to be true to our sense of conscience, and our consciousness about what needs to happen in the world; to follow our dreams for what we want to achieve in the world,” Smith said.

Smith who addresses business leaders, students and other groups coaches them on the five pillars of trust which are sustainability, cooperation, integrity, purpose and stewardship. These coupled with the eight Cs of trust – contracts, covenants, competence, character, conscience, conviction, courage and change determine the culture of business organisations.

“We tend to think that the competitive free market is what drives efficiency but there are times when you really have to cooperate, and you even have to cooperate with your competitors in order to achieve a greater result. Cooperation sometimes pays better than competition.”

He said that within some big organisations, the 10 top performing employees are promoted and the 10% at the bottom ignored. “It simply creates a climate of fear. That’s what it does. And it’s self-defeating in the long run. What employees ought to be doing is sharing information with each other for the greater good and the best companies encourage that which in turn improves performance.”