Twentieth anniversary of the Caux Round Table Principles for Business 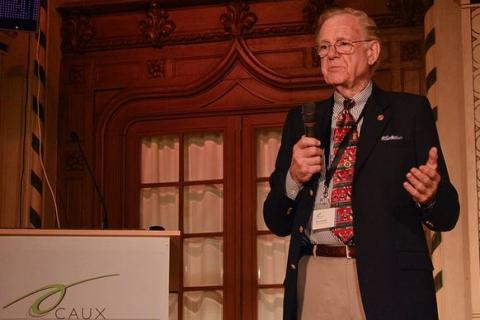 Describing himself as a 'can do' person, Robert MacGregor, from Minneapolis, Minnesota, told the Caux TIGE conference last night how he had been instrumental in launching the Caux Round Table Principles for Business 20 years ago. The Principles, written by senior US, European and Japanese business leaders, were first published in July 1994 and quickly became what MacGregor claimed are one of the 'most widely used' codes of best practice around the world. They have been translated into 12 languages.

They grew out of the Minnesota Principles for Business, which American business leaders had drafted when MacGregor was the head of the Minnesota Centre for Corporate Responsibility. He had presented the Minnesota Principles to one of the early gatherings of the Caux Round Table, which redrafted them to include the Japanese concept of 'kyosei' (interpreted as living and working together for the common good), as articulated by CRT founder member Ryuzaburo Kaku, then Chairman and Chief Executive of Canon corporation. The CRT was the brainchild of the late Frits Philips, when he was head of the Dutch electronics multinational, who was concerned to avert a growing trade war between Japan and the Western economies.

MacGregor declared to the TIGE conference that 'you are looking at a fortunate, blessed person' who had always surrounded himself with 'people who are cleverer than I am. We got results because I surrounded myself with saints.

He told the conference about his journey in life, as a businessman, an ordained Presbyterian minister, community organizer in Chicago and city government politician. His main focus had been on encouraging job creation in the downtown construction industry. In Minneapolis, he and his colleagues had helped to evolve the city's nine-mile skyway transport system. He was the President of the Community Office for Public Welfare, and campaigned for desegregation in the public schools.

Business Success, he said, lies in 'contribution not acquisition. What is the purpose of business? To serve society. Profit is the reward for service.' He led the organising of the Five per cent Club of companies in the Twin Cities of Minneapolis and St Paul, which donate five per cent of their profits to community and charity initiatives.

The 82-year-old MacGregor, who has been married to his 'saint Mary' for 59 years, urged young entrepreneurs attending the TIGE conference to live and behave the way they would like to see the CEOs of big corporations should behave. 'Let us create deep friendship and understanding between us. That depends on honesty,' he concluded.